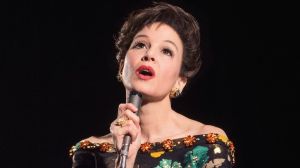 There is unlikely to be much overlap between the respective movie-going demographics but in one aspect, at least, Judy is a lot like this week’s other major release, Joker. As with the focused, performance-driven  DC spin-off, Judy’s big and only idea is its central turn. Everything else in the film is dwarfed by the hugeness of the lead role.

Renée Zellweger, essaying the late Judy Garland in her sorry last months, is practised, polished, dedicated and exercised. The Academy will likely lap it up.

Watching Judy, not once, not for a single second, does the viewer forget that they are watching a performance. That’s not Zellweger’s fault. The Chicago and Bridget Jones star works awfully hard to produce a passable impression of Garland’s singing voice, albeit with about half of the remarkable diaphragm of the film’s subject, but her efforts are undone by far too many miming numbers, all of which play crucial nanoseconds out of synch.

Judy is adapted by screenwriter Tom Edge from Peter Quilter’s stage play End of the Rainbow, and is directed by Rupert Goold and concerns her last British tour. Those theatrical origins tell in the smallness of the film’s world.

For all the awards season banter, Judy never feels like anything more than a classy teatime TV movie, replete with too many close shots, naff unconvincing period details, and bad wigs.

Characters that ought to be significant are sidelined. Finn Witrrock, as Judy’s last husband, is given nothing to do but smile. Sid Luft (Rufus Sewell) – an ex-husband locked in an acrimonious custody battle with The Wizard of Oz star – is underwritten. Promoter Bernard Delfont (Michael Gambon) who brings Garland to London and the exasperated assistant (Jessie Buckley) he assigns to Judy, are barely there. A scandalously fleeting shot of Judy and Liza ( played by Irish actor, Gemma-Leah Devereux) reduces one the most fascinating biographical elements to a sole passive-aggressive remark.

Judy’s career was often self-reflexive, and diehard fans will surely note the overlap between the film’s time period – bar a few Oz flashbacks featuring an excellent turn by Darci Shaw as the young Judy – and I Could Go on Singing (1963) and wish they were watching that instead.