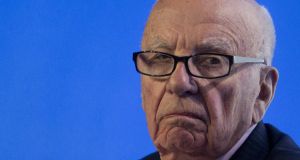 Rupert Murdoch’s News Corp Australia asked the country’s regulators to push the break-up or effective separation of Google’s digital advertising business because of the damage it was inflicting on the nation’s media industry.

News Corp made the request in an 80-page filing with the Australian Competition and Consumer Commission following a preliminary report from the regulator, recommending that a new or existing watchdog should investigate and monitor how large digital platforms rank and display ads and news.

In the document, Murdoch’s company criticised the existing practices and power of Google-parent Alphabet, and Facebook, calling for more regulatory oversight.

“The market power that Google and Facebook occupy makes it difficult even for sophisticated and experienced businesses like News Corp Australia to negotiate any terms of business,” the company said in its filing.

A Google spokesman didn’t immediately have a comment on the filing.

News Corp’s suggested remedies include “requiring digital platforms to make certain divestments; specifically, that Alphabet should divest Google Search or Google Ad Manager” and “requiring functional separation and access to data on fair, reasonable and non-discriminatory terms: requiring the functional separation of each component of Google’s ad tech functions, including Google Search, and access to the data Google holds on [fair, reasonable and non-discriminatory terms].”

The Australian regulator, in its preliminary report, said Google and Facebook had become the “dominant gateways between news media businesses and audiences”, leading to a loss of advertising revenue and ultimately cuts in the number of journalists who could play an important role in “exposing corruption and holding governments, companies, powerful individuals and institutions to account”.

The regulator will consider all submissions, but it did not recommend a break-up in its interim report late last year, said Rob Nicholls, a senior lecturer at the University of New South Wales Business School in Sydney.

Separation would be a “significant step” and a “pretty hefty remedy”, said Mr Nicholls, who researches competition law. There was “no indication that the [regulator] will take that course.”

The regulator’s December report contained 11 preliminary recommendations, including preventing Google’s internet browser, Chrome, from being installed as a default app on mobile devices, computers and tablets, and preventing Google’s search engine from being installed as the default on internet browsers. The report also identified eight areas for further analysis as the inquiry continues.

“The [regulator] considers that the strong market position of digital platforms like Google and Facebook justifies a greater level of regulatory oversight,” chairman Rod Sims said in a statement at the time.

News Corp is the country’s largest newspaper publisher with mastheads including the Australian national broadsheet as well as the most popular tabloids in Sydney and Melbourne. – Bloomberg