Dutch side in surprise triumph over Real Madrid 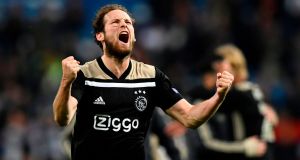 There’s nothing like a knockout win to lift shares in a football club.

After Ajax’s triumph over Real Madrid in the Uefa Champions League on Tuesday night, the Dutch club’s shares have hit a record high.

The Amsterdam club is sometimes known by the nickname “Sons of the Gods” and investors who bought into Ajax’s stock will be offering up prayers of thanks after the 4-1 win in Madrid. The Euronext-listed shares rose almost 11 per cent to a peak of €17 on Wednesday, adding roughly €27 million to its market capitalisation.

The style as well as the substance of last night’s victory was reminiscent of Ajax’s glory days, when Johan Cruyff helped the club to three European cups in the early 1970s. The club last won the continent’s top tournament, one of the most lucrative in the sport, by beating AC Milan in the 1995 final.

The exciting football played by a young side has raised hopes that Ajax could be one of the up-and-coming forces of European football, after decades of dominance from Spanish and German clubs. Tuesday’s standout performer was Dusan Tadic, Ajax’s Serbian midfielder, who was rated a rare perfect 10 score from L’Equipe, the French magazine.

The victory puts the Dutch side in the draw for the quarter finals of the Champions League, which will take place in April, with semi-finals in May before the last two sides left face off in Madrid at the Estadio Metropolitano on June 1st.

Potential opponents include England’s Tottenham Hotspur, who have not won European silverware since the early 1980s. Two of the continent’s richest clubs - Manchester City and Paris Saint-Germain - are also expected to be contenders, although they have yet to face their opponents in the round of 16, Schalke 04 of Germany and Manchester United respectively.

The remainder of the ties to produce the other quarter finalists will be played on Wednesday night and early next week. – Copyright The Financial Times Limited 2019