Daily Mail to cut more than 20% of its Irish staff 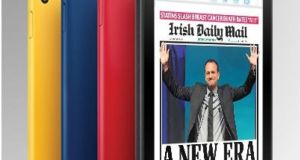 The Irish Daily Mail Newspaper, which has announced a major redundancy programme

DMG Media Ireland, the company that publishes the Irish Daily Mail and the Mail on Sunday, is seeking 35 voluntary redundancies, more than 20 per cent of its current staff.

The firm, which currently employs 156 staff here, said the redundancies were triggered by falling newspaper sales and declining advertising revenue.

It also said that, if the proposed voluntary scheme was undersubscribed, it would move to compulsory redundancies. Staff were told the redundancies would focus primarily on the Daily Mail rather than the Mail on Sunday edition.

The move comes as recent figures show the Irish Daily Mail’s print circulation in the Republic fell by nearly 20 per cent to 29,654 in the second half of last year.

Under the proposed scheme, staff would be offered six weeks’ pay per year of service. That will include two weeks statutory redundancy pay capped at weekly earnings of €600, plus another four weeks of pay per year served.

Service under the scheme will be capped at 25 years.

“Meeting the challenges presented by a continuing declining newspaper and advertising market requires us to constantly review our operations,” DMG said in a statement circulated to staff on Friday afternoon.

“A decision to restructure the business in how we work has come under the scope of the latest review. Regrettably this means that some roles are likely to become redundant,” it said.

The company said employees opting for redundancy were not expected to work out their notice period and would be paid for any outstanding annual leave accrued.

DMG Media Ireland chief executive Paul Henderson said: “We will continue to ensure the business is future-proofed and can adapt and grow through what is undoubtedly a challenging time for newspaper publishing and the continuously changing media landscape.”