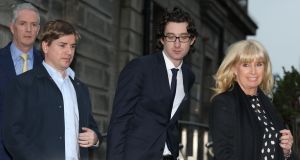 In the end, Denis O’Brien was not even in court for this, his first taste of loss in a defamation action against an Irish newspaper. He has savoured victory several times before. His absence for the verdict on Friday, only the first full day he missed of the trial, will not have lessened the astringency. Defeat is bitter.

On 17 days of sittings over four weeks at the High Court, Mr O’Brien had sued the Sunday Business Post over articles about details of Irish banks’ biggest boomtime borrowers, including his, published almost four years ago.

They were written by its former business editor Tom Lyons, under the Post’s former editor Ian Kehoe. The two men had patiently waited for a verdict since the jury began deliberating at lunchtime on Thursday.

Courtroom number 25, meanwhile, had morphed into an impromptu common room for journalists covering the case, as well as both legal teams. The longer the wait went on, the tighter the ratchet moved on the tension.

The first signal that the jury had reached a verdict was when two of them suddenly appeared on the street outside for a smoke at 3.55pm. More exited the deliberation room and made for the bathrooms. Immediately, Lyons’s phone rang in the lobby. “Are you sure?” he whispered. It was time.

It took Mr Justice Bernard Barton until 4.05pm to arrive from his office on the far side of the complex. Just 10 minutes, but, to all those on both sides whose reputations were under scrutiny, it must have felt longer.

In rushed barristers – led by former minister for justice Michael McDowell for the Post, and Paul O’Higgins SC for O’Brien – friends and family of the protagonists.

O’Brien’s closest advisers, including solicitor Paul Meagher, longtime ally Maria Mulcahy and legal and publicity adviser Brian Harmon, gathered at the back of the court in the absence of the businessman.

Kehoe looked pale and nervous. He sat to one side of Lyons, whose father, as he had for the whole trial, sat on his other flank.

Meanwhile, the 11 members of the jury – eight men, three women – simply looked relieved as the completed issue paper, containing answers to the six complicated questions asked of them, was handed over.

As the judge read their majority verdict, issue by issue, it soon became apparent this was not to be O’Brien’s day.

Did the articles mean he was partly to blame for the destruction of the banking system? No. Did they mean he got cheap credit due to his connections? No. Had he wanted to suppress a Government report about major borrowers? No.

The Post was halfway to victory, but then the judge paused, reading for several seconds to himself instead of all assembled. Silent exasperation radiated from the body of the court until he resumed.

The emotion overwhelmed Kehoe as he mouthed “thank you” to the jury. Lyons’s father gripped Kehoe’s shoulder, and then embraced his son. The two former Post journalists would afterwards say this was a good day for freedom of the press. It wasn’t a bad day for dads, either.

Kehoe dived for an executive from the Post’s insurance company, which was off the hook for the €1 million costs. “There’s the man with the balls,” he said.

Morrissey disappeared without comment about his client’s next move. O’Brien’s legal team conceded on costs and then shortly afterwards graciously congratulated the other side in the lobby.

It hadn’t always been this cordial during the trial.

Three days previously, in his summing-up, McDowell gestured to O’Brien in the same courtroom and told the jury the State’s wealthiest and most powerful businessman had a “casual relationship with the truth”. It had clearly stung O’Brien, who had otherwise hidden his emotions well.

His legal team, meanwhile, had previously argued the former Post journalists were “malicious” and exhorted the jury to ignore McDowell’s plea to throw the case out “on its backside”. O’Higgins had asked them instead to look at the evidence. They did, at length, and backed publication.

For Kehoe and Lyons, they can now focus on their impending new digital journalism business, which they have left the Post to establish.

For the newspaper, which has changed ownership since the articles were published, the verdict will come as a welcome fillip as it ploughs on in a difficult media market where such victories are rare. The articles in question were released from behind its paywall, while its journalists tweeted their approval.

Ultimately, O’Brien’s taking of the case came to nothing for him

For O’Brien, who has so often communicated his disapproval of the coverage of his financial affairs by Irish media, he must consider whether to fight on to a higher court. Meanwhile, he has a business empire to run.

His mobile company Digicel must continue to grow to meet its obligations to its bondholders. Its founder’s four-week jaunt to the High Court didn’t help to advance these strategic interests.

Ultimately, O’Brien’s taking of the case came to nothing for him.

But, for the wider media industry, which always grapples with the risks of publishing the affairs of powerful people, it may have resulted in something more durable: vindication.

1 Player Wills site: Hines and APG to seek permission for 416 homes
2 Eir sells share capital of Emerald Tower for €300m
3 Developer O’Flynn calls for task force to deal with housing crisis
4 Pilita Clark: A lot of us are losing it in lockdown – but we really shouldn’t
5 Consumer spending fall may cut indirect tax revenues by up to €6.7bn
6 EU divisions laid bare by ‘frugal four’ Covid recovery proposal
7 Lobbyists Zoom in to get their message across to Ministers
8 Ryanair on hook for €1bn in passenger refunds due to Covid-19
9 Pricewatch: Coronavirus has given us four categories of shopper
10 Will remote working mean an end for the corporate HQ?
Real news has value SUBSCRIBE