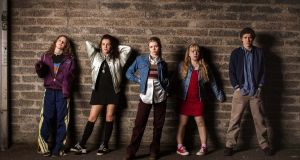 One of the best things about Channel 4’s Derry Girls has been witnessing the positive if sometimes perplexed international reaction to the series once it hit Netflix (outside Britain and Ireland) in December.

The comedy, written and created by Derry native Lisa McGee, could have been completely scrolled over in the glut of quality content, but viewers and reviewers who may know nothing of Derry or the Troubles are instead finding it and loving it.

The Hollywood Reporter said it “upends the presumption of noble misery” growing up in Ireland and “only a feckin’ eejit wouldn’t be charmed”. The Sydney Morning Herald labelled it “sweet, sassy and very funny”. And US site Slate paid tribute to “the many faces” of lead actor Saoirse-Monica Jackson in gif form.

Other (English-speaking) viewers confessed the accents had them reaching for the subtitles, but this didn’t seem to put them off. Indeed, in keeping with the common misunderstanding that Netflix itself commissions all the shows labelled “Netflix Original”, there were calls on social media for Netflix to renew it.

Channel 4, which did commission it, has long since renewed Derry Girls. It returns tonight in the earlier time slot of 9.15pm, when, the theory goes, it will be gifted an “inheritance” of extra viewers from the preceding show, a celebrity Bake Off special.

The decision to bring back the series was made swiftly after the first episode debuted to an overnight audience of 1.6 million in January 2018, rising to 2.5 million in the consolidated figures (which includes people who catch up on the show within a week). It sustained this performance throughout the first six-episode run.

This makes Derry Girls a precious double-hit. It is a success story as an appointment-to-view programme for the linear channel of a traditional broadcaster, one capable of drawing a sizeable proportion of younger viewers (including two-thirds of 16-34-year-olds in Northern Ireland).

But it is also an on-demand magnet, having become the biggest comedy launch on Channel 4’s All4 platform before attracting attention as an Irish curiosity on Netflix.

With the show also winning the highest viewing figures in Northern Ireland since modern measurement methods began in 2002, the overseas reception should be seen as a bonus rather than necessary validation. But it’s nevertheless a good case study for any nervous commissioners tempted to water down the local flavour of the shows they back. Often it isn’t a battle for a comedy to transcend its cultural peculiarities – the laughs can instead be enhanced by them.

That Derry Girls was capable of translating internationally probably shouldn’t be too much of a surprise. Jackson’s character Erin Quinn is that classic sitcom archetype of the idiot who is surrounded by bigger idiots. Set in the 1990s, it extends a recent fashion for period sitcoms that includes the BBC’s The Kennedys, RTÉ’s Bridget & Eamon and Sky’s Moone Boy, while being better than all of those. A vast constituency of people with zero connection to Derry can remember being a teenage girl in the 1990s with sheepskin-trimmed denim jackets and skinny-rib tops.

Whatever the reasons, it is not an accident that RTÉ didn’t make Derry Girls. So who did, exactly?

Netflix, rather than Channel 4, may get the credit for the show from some international viewers, but when Derry Girls got a mention in a Dáil broadcasting debate last March, it was mistaken by one TD as an example of an RTÉ show that had left its audience abuzz with praise.

It seems that when RTÉ director-general Dee Forbes laments to political ears how the “best and the brightest” must go elsewhere to get their ideas generated – because RTÉ, like Mrs Quinn on holiday without her punt purse, is strapped for cash – she does so in vain.

Whatever the reasons, it is not an accident that RTÉ didn’t make Derry Girls. So who did, exactly? Commissioned by Channel 4’s head of comedy Fiona McDermott, Derry Girls was produced by the long-standing independent company Hat Trick with funding support from Northern Ireland Screen.

Hat Trick has been round the block. Alongside the enduring BBC panel show Have I Got News For You, it has amassed a portfolio of scripted comedies that includes Drop the Dead Donkey, Episodes, Outnumbered and Flack. From an Irish perspective, however, the key show in its back catalogue is Father Ted. Derry Girls is history repeating.

Does it matter who makes it? It does to Channel 4, currently basking in a smugness that would make Erin’s friends recoil. It’s understandable. When the initial viewing figures came in, it described Derry Girls as its biggest comedy launch since 2012, when a pilot for Ricky Gervais project Derek attracted an overnight audience of 2 million.

After the consolidated figures were totted up, it was promoted to the biggest comedy launch since 2004, when Peter Kay and Paddy McGuinness lured 3.6 million viewers to the channel for the first episode of Max and Paddy’s Road to Nowhere.

The popularity of Derry Girls is all the more notable given that none of cast had a track record or stardom in Britain akin to that of Kay or Gervais. At a time of overall decline in linear viewing and a splintering of the audience, its return tonight has been nicely inflated by a year’s worth of word-of-mouth, murals and deserved devotion.