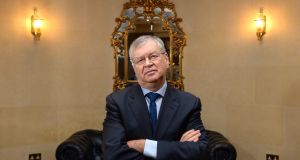 RTÉ presenter Joe Duffy. Mr Duffy is not a paid employee of RTÉ but is employed as a contractor. Photograph: Dara Mac Donaill

Accumulated profits at the media company operated by one of Ireland’s best known broadcasters, Joe Duffy, have topped €505,000.

Accounts filed by the Liveline presenter’s company, Claddaghgreen Ltd, show that accumulated profits increased by €70,274 to €505,971 in the 12 months to the end of April last.

Figures released by RTÉ in December show that Duffy remained the third highest paid presenter with earnings of €389,988 in 2016, the same level as the previous year.

In the latest pay figures, the Ballyfermot man trails behind only Ryan Tubridy and Ray D’Arcy in RTÉ’s top 10 earners.

The broadcaster’s pay from RTÉ also include his work on the TV show Liveline Callback.

The most recent JNLR figures show that outside of Morning Ireland, Liveline is the most popular radio show in the country with a listenership of 381,000 with the survey showing an increase of 7,000 listeners as the show continues to drive public debate here on a variety of issues.

Mr Duffy is not a paid employee of RTÉ but is employed as a contractor. His pay does not include pension contributions from the State broadcaster.

Mr Duffy joined RTÉ as a radio producer in 1989. Since then he has worked on several shows, first as a reporter on The Gay Byrne Show and then subsequently as presenter.

His income is also boosted by being a weekly columnist with the Irish Mail on Sunday.