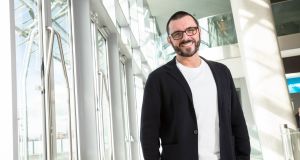 The BBC is weaning itself off two creations of the 20th century: the fonts Helvetica and Gill Sans. To modernise its “visual tone of voice”, the media organisation has embarked on the complex process of implementing a new typeface it commissioned itself, named Reith.

Helvetica and Gill Sans were invented with the printed page in mind and “don’t perform very well online”, says David Bailey, the BBC’s creative director of user experience and design.

Bailey, who spoke to Irish marketers about the project at the Marketing Institute of Ireland’s DMX Dublin event, says the BBC was “late to the game” starting this massive project, which is expected to take more than a year to complete.

BBC News is due to go live with Reith - named after the first director-general of the BBC, John Reith - this spring, following BBC Sport, which became the first part of the organisation to do so last summer. “There have been very few complaints, which is always a good sign.”

Eventually, it will be able to retire its font licences, saving the organisation money. But it says that solving legibility problems – often heightened by small mobile screens – was “first and foremost the most important thing”.

For example, the character design improves accessibility for people with dyslexia, for whom the shape of “b” and “d”, and “p” and q”, can become jumbled. In the Reith typeface, the “b” has no spur at the bottom of its stem, whereas the “d” does, and likewise the “p” has a spur at the top, but the “q” doesn’t.

“Disambiguation between characters that look similar – marking them by taking away or adding a spur, or making the descenders of a character more distinctive – can help a lot with readability,” says Bailey. “Some very subtle changes can make all the difference.”

Working with typeface designers Dalton Maag was “very rewarding, and certainly helped educate the rest of the organisation [to] understand where we weren’t so successful on this in the past”.

One particular problem for a media company with Helvetica is its ubiquity. “It’s everywhere, because designers like it, and when designers like something, they absolutely use it to death. By using Helvetica, you can kind of remain invisible. You have no personality.”

The idea is that commissioning its own typeface (which can be deployed in a range of weights and styles) will also help the BBC’s brand be more distinctive.

This is important at a time when people are increasingly encountering the BBC on third-party platforms such as social media and video-on-demand services where it must fight hard for attention with more rivals than ever.

“One could argue that a public service organisation should be seen as unbiased and the typeface they communicate with should be seen as anonymous. But if we’re to survive, we need to stand out in a very busy marketplace,” says Bailey.

His message to marketers is that a design tool “can be very powerful” when it comes to helping with business strategy. A typeface like Reith is really “a shared piece of technology” that brings an organisation together.

John Reith, who came up with the mission statement “inform, educate and entertain”, would probably have approved.

T-Mobile and Sprint strike new deal terms 19:03
Rio Tinto looks to diversify board with addition of more women 18:09
Profits rise at tractor-maker Deere on easing of US-China trade dispute 17:23
Will Avolon find itself on the block as China prepares to seize troubled parent HNA? 17:05
Why Sweden ditched its negative rate experiment 16:08
Search executive
jobs on irishtimes.com