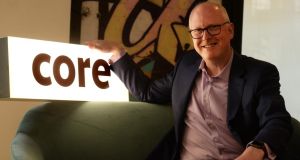 Core chief executive Alan Cox called on the Government to commission an independent report to explore the threats to the financial sustainability of news publishers. Photograph: Cyril Byrne

Advertising spend in the Republic will increase by just 0.6 per cent to €1.044 billion this year, with online market growth barely offsetting a decline in “offline” spending, media-buying group Core has forecast.

Intensifying concerns about the risk of a hard Brexit have led to a “poor, but not unexpected” start to 2019 for the Irish advertising market and the uncertainty may well continue deeper into the year, said Core in its Outlook 2019 report.

The subdued forecasts from Ireland’s largest marketing communications group follow a lacklustre 2018 during which Brexit was “a significant factor”. Although the economy grew by 6.8 per cent last year, this did not translate into a buoyant media market, with advertising spend increasing by just 2.2 per cent.

Core forecasts that online ad spending will expand by 6.3 per cent to €519.5 million in 2019, a slower rate than in previous years.

Google and Facebook had combined revenues of €355 million in the Republic in 2018, or a 73 per cent share of the online ad market, Core estimates. Facebook’s Irish ad revenues grew 29 per cent, it believes, and should power further ahead in 2019 despite issues relating to data privacy, security, misinformation and extremism on the platform.

Core chief executive Alan Cox said this state of affairs contributed to question marks over the future viability of Irish news media. He called on the Government to commission an independent report similar to the UK’s Cairncross Review to explore the threats to the financial sustainability of news publishers.

“There is a strong, positive link between media consumption and national belonging. We cannot take risks with this – it is a national crisis-in-waiting,” Mr Cox said. “Other countries are taking this matter seriously.”

Meanwhile, a surge in online video advertising, also dominated by Facebook and Google-owned YouTube and expected to reach €96 million this year, is having a dampening effect on television – once the biggest medium for advertising.

Television revenues grew by just 1 per cent in 2018 to €221.3 million, thanks to rising investment in sponsorships, according to Core. However, it predicts they will decline 2.9 per cent to about €215 million this year.

Although Netflix does not carry advertising, the platform is “obviously having an impact on traditional advertising-funded broadcasters” because of its impact on the consumption of linear TV channels, Core concludes.

Offline media advertising will see a third consecutive year of decline, with spend falling 4.5 per cent to €525 million. After contracting 10.6 per cent last year, print advertising will decline by a further 11.1 per cent this year to less than €107 million, Core forecasts.

Radio will also have “another difficult year”, with revenues forecast to decline 5.5 per cent to €111 million after a 4.6 per cent drop in 2018.

On a brighter note, out-of-home advertising spend is expected to rise 1.8 per cent to more than €84 million, while cinema advertising, which was hurt by a decline in alcohol ads last year, will edge up 0.6 per cent in 2019 to €7.4 million. Sponsorship revenues will grow 8 per cent to €189 million, adding to strong levels of investment in recent times.

Core acknowledged that estimates of the value of the Irish media market often varied substantially between different organisations. “This needs to stop,” said Mr Cox, who suggested a co-ordinated industry approach could be managed by an independent third party such as an accountancy firm.