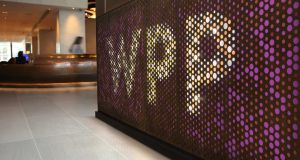 WPP plans to shed under-performing parts of the business and make itself leaner. Photograph:WPP

Advertising giant WPP has reported a hefty drop in annual profit and warned that challenging conditions will persist into the first half of 2019.

WPP blamed the impact of restructuring and transformation costs, as well as a goodwill impairment.

The group is grappling with several big-name account losses, such as car giant Ford, which has dragged on its performance.

In October, shares in WPP collapsed when the firm trimmed full-year guidance, reported lower-than-expected third-quarter sales and confirmed that it wants to offload Kantar.

Chief executive Mark Read said: “As we have said previously, 2019 will be challenging – particularly in the first half – due to headwinds from client losses in 2018.

“However, we start the year with fewer clients under review than we did in 2018, and investments in creativity and technology will further improve the competitiveness of our offer.”

WPP is also in the process of axing 3,500 jobs worldwide under plans to slash costs by £275 million (€320 million) a year as it looks to turn around its fortunes.

WPP, which was rocked by the sudden departure last year of founder and chief executive Martin Sorrell, plans to shed under-performing parts of the business and make itself leaner.

The company said it is performing strongly in Europe, Asia, Latin America and the Middle East, adding that it is addressing issues in the United States.

“We are at the beginning of a three-year turnaround plan, but WPP’s new positioning as a creative transformation company with stronger, more integrated, more tech-enabled agencies is already proving effective, having driven several of our recent new business successes,” Mr Read added.