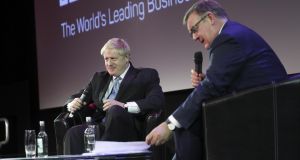 A number of leading State’s agencies paid €33,050 for 81 staff to see the likes of Richard Branson and Conor McGregor appear at the Pendulum Summit last year.

A spokesman for Nama confirmed that eight staff attended the 2019 event at a cost of €3,400.

A spokesman for the NTMA confirmed that the agency purchased 15 tickets for €12,750 for staff to attend this year, which provided the possibility of 30 attendees across the two-day event.

“The NTMA actively encourages the professional development of its staff including by providing the opportunity to attend relevant external events, particularly events independently accredited for Continuing Professional Development purposes,” he said.

This year’s summit was headlined by British MP Boris Johnson, who was paid €58,230 to speak at the event.

Frankie Sheahan, chief executive of the Pendulum Summit, said the costs to the summit of having Mr Johnson speak are more that the published sum “but that is the figure he netted from the event”.