UK watchdog’s warning on spreadbetting sparks a fall in shares 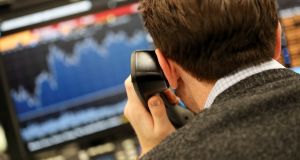 “We believe there is a high risk that firms across the [contracts for difference] sector are not meeting our rules and expectations when providing and distributing CFDs,” the FCA said in a report critical of the industry. Photograph: Simon Dawson / Reuters

Shares in spread-betting companies fell sharply as trading opened on Wednesday following the review by the Financial Conduct Authority (FCA). Shares in CMC Markets, IG Group and Plus500 fell by more than 7 per cent, with IG Group the biggest percentage loser in the FTSE Midcap Index in early trade.

The regulator said it had sent a letter to all providers and distributors of these products to retail customers to ensure they “pay due regard to the interests of customers and treat them fairly”.

“We believe there is a high risk that firms across the sector are not meeting our rules and expectations when providing and distributing CFDs. As a result, consumers may be at serious risk of harm from poor practices in this sector,” the FCA said.

CFDs let investors bet on both the direction a share price, currency or other financial product will move, and the extent of the change in price, and there is no stamp duty.

The industry is regulated by European Union rules, which have no caps on leverage. That means investors can take out bets that are far larger than their initial outlay, offering greater potential returns but also running the risk of huge losses.

The European Securities and Markets Authority (Esma) last month said it was considering restricting the marketing, distribution or sale to retail clients of CFD products.

The British regulator expressed concerns over the way the products were marketed to retail customers and identified flawed due diligence processes, conflicts of interest and poor remuneration practices.

The majority of retail customers who bought CFD products on either an advisory or discretionary basis lost money, the FCA said after it reviewed 34 firms over a 12 month period.

Shares in leading British spread-betting firms fell last year after the FCA warned it had serious concerns about retail buying of CFD products.

The watchdog on Wednesday said it identified one CFD provider whose arrangements were so poor that it intends to take further action. It also said several providers had said they intend to stop providing CFDs to firms that distribute this product on an advisory or discretionary basis.

Others have already stopped distributing CFDs on these bases to retail consumers.

The FCA said firms should define their target market precisely and not rely on broad investor descriptions such as “experienced”, “sophisticated” and “financially literate”. Firms should also look at how they communicate with clients and due diligence around taking on new distributors, among other measures.

The regulator said many firms failed to provide satisfactory evidence that they complied with the FCA’s remuneration code, with some paying staff on a 100 percent variable basis. It also said companies were not properly managing conflicts of interest.

“At some firms, senior staff held several roles; for example, at one firm the CEO was also head of compliance. This amounts to a conflict and so should require the firm to put in place relevant controls,” it said.

Spread-betting firms IG Group, CMC Markets and Plus500 did not respond to requests for immediate comment. – Reuters