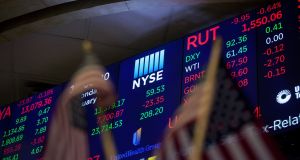 Monitors display stock market information on the floor of the New York Stock Exchange (NYSE) in New York, on Monday, January 8th. U.S. stocks were mixed, with the S&P 500 Index on track for its first decline of the year, while the dollar strengthened after three straight weekly declines. Photograph: Michael Nagle/Bloomberg

European shares hit their highest level in more than two years on Monday as confidence over global economic growth and mergers and acquisitions continued to boost investor appetite for stocks.

In the US, the S&P 500 and the Dow struggled to edge higher, stalling the strong rally that marked the start of 2018, pressured by losses in healthcare and bank stocks.

Aminex fell 2.6 per cent following atrading update on Monday morning, in which it announced that discussions are underway with the Tanzanian government over the management and drilling of a well.

Independent News and Media fell by more than 2 per cent, as investors await the return to the High Court this month of an application by the State’s corporate watchdog to view documents held by INM’s chairman, as part of a corporate governance investigation into the company.

It was knocked as Micro Focus plummeted close to 17 per cent, leading the losers following its half-year results, which missed some analyst expectations.

The British firm that bought Hewlett Packard Enterprise’s software assets in an $8.8 billion deal said its revenue would fall 2-4 per cent after a disappointing sales performance in recent months.

Shire shares were also among the worst performers, down 210p, after a strategic review resulted in the pharmaceuticals giant announcing that it would create two separate business divisions to cover rare diseases and neuroscience respectively.

Shares in Mothercare plunged more than 27 per cent or 17.05p to 44.95p as the baby-goods retailer warned over profits after an unscheduled trading update revealed that UK like-for-like sales plummeted 7.2 per cent in the 12 weeks to December 30th, while online sales tumbled 6.9 per cent.

That level suggests Ablynx investors are ready to pay a light premium in the hope of a higher rival bid or a sweetened offer by Novo.

The auto sector signed off a positive session up nearly 1 per cent. Italian-American automaker Fiat Chrysler rose about 1 per cent after a note from Morgan Stanley highlighted the potential of a spin-off of its Jeep brand.

Elsewhere in the sector, France’s Renault climbed 1.5 per cent, while Germany’s BMW, Daimler and Volkswagen rose between 0.3 and 1.3 per cent.

Kohl’s Corp jumped as much as 8.7 per cent after the department store operator posted far stronger same-store sales for the holidays than its bigger peers. Amazon edged up 1.23 per cent after Credit Suisse hiked its price target on the online retailer’s stock.

Nvidia jumped about 4 per cent after the graphics chipmaker announced partnerships with Uber and Volkswagen as its artificial intelligence platforms expand into technology for self-driving cars.

GoPro shares plunged 33 per cent to hit a record low at $5.04 after the company said it expected lower fourth-quarter revenue and that it would exit the drone business. (Additional reporting: Reuters/PA)