MiFID II has implications for brokers who describe themselves as ‘independent’ 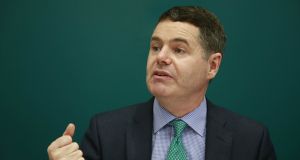 Minister for Finance Paschal Donohoe intends to use the introduction of another batch of rules this year – the EU Insurance Distribution Directive – to ban commissions in insurance-linked investment products. Photograph: Nick Bradshaw

Remember the Y2K bug? The fears ahead of the turn of the Millennium that computers would seize up globally, prompting planes to fall from the sky and a general meltdown of civilisation?

The hoo-ha in financial circles in the lead-up to the biggest overhaul this week in market rules in a decade had faint echoes of that hype.

Banks and investment firms had spent about €1.7 billion on compliance and IT systems upgrades before the reforms, known as the Markets in Financial Instruments Directive II (MiFID II). They’re aimed at increasing transparency and protections for investors – and giving regulators access to all sorts of stock, bonds and commodities trading data to help spot potential asset bubbles.

The European Securities and Markets Authority (Esma), which is overseeing the implementation of the rules, was quick to declare on Wednesday, when MiFID II went live, that the whole thing had gone fairly smoothly.

There have, of course, been teething problems – including here in Ireland, where the Central Bank was unable to have machines in place as planned to automatically receive transaction data from financial firms on January 3rd. These will be ironed out in time.

But fears that markets would grind to a halt under failing IT systems have proved unfounded.

Among the 1.7 million paragraphs of rules is a measure requiring investment managers to inform clients promptly if the value of their portfolios fall by at least 10 per cent during a reporting period. It is feared in some quarters that this may increase market volatility, turning otherwise sanguine investors into panicked sellers.

The rules also ban investment firms regulated under MiFID II from paying inducement commissions to brokers, if the latter want to describe themselves in future as “independent”. It’s a status that, importantly, also requires advisers to assess a sufficient number of products to best suit clients’ needs.

However, the vast majority of financial brokers are not affected by the new rules, as about 90 per cent of investment products in Ireland are wrapped up in insurance policies.

It emerged last month that Minister for Finance Paschal Donohoe intends to use the introduction of another batch of rules this year – the EU Insurance Distribution Directive – to ban commissions in insurance-linked investment products. It would align Ireland with the likes of Britain and the Netherlands, which have outlawed commissions and inducements on most investment products.

However, Donohoe’s plan carries a massive exemption: it will only apply to intermediaries who opt to be called “independent” under the directive.

The Central Bank, which is advising the Minister, put out a consultation paper in November that also proposes maintaining commissions for brokers who don’t pitch themselves as being independent.

Insurance companies and brokers appear to have argued successfully that a block on commissions would lead to an “advice gap”, as many potential investors and savers would not be prepared to pay an alternative upfront fee.

Recent Central Bank research shows that about three-quarters of investors like the idea of a financial adviser being independent and not tied to one or a small group of product providers. And while almost half preferred a cheaper once-off, upfront fee for advice rather than a commission structure, fewer than a quarter would be prepared to hand over cash every time their broker was asked to shop around for products.

The Central Bank plans under the insurance directive to make commissions structures more transparent – forcing advisers and brokers to display all of their “inducement arrangements” with product producers on their websites and in their office. But customers still stand to lose ultimately.

Commissions structures can involve an upfront cut from product providers of up to 5 per cent on an amount invested, plus 1 per cent per annum over the next five years. This means that advisers are incentivised to keep clients locked into the investment for half a decade.

Upfront fees can be as little as 1 per cent of the sum invested and a flat €500 charge a year thereafter. By not being incentivised by product providers, advisers can focus solely on the needs of the client.

The Central Bank is open to receiving submissions until March 22nd, though the insurance directive is set to take effect in October. You can be sure that brokers and insurance firms’ lobbying machines are well-prepared.

As things stand, industry watchers say that the vast majority of the 2,600 regulated intermediaries in Ireland will opt for non-independence status – with all the conflicts-of-interests risks that entails – meaning the banning of commissions is little more than a fig leaf with no practical impact.

The window is tight for people with an interest in consumer protection to persuade authorities to make an about-turn.