Agenda: Applegreen and CRH top of the list, but C&C and PTSB are out of favour 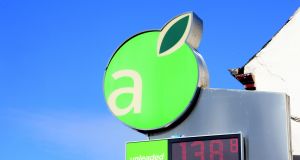 Applegreen, whose shares surged 29 per cent last year, is among the most widely tipped Irish stocks among analysts for 2018. Photograph: Cyril Byrne

Fuel forecourt Applegreen, whose shares surged 29 per cent last year, is among the most widely tipped Irish stocks among analysts for 2018, as the Irish economy continues to grow and the group expands further in the UK and the north-eastern US.

Merrion Capital expects the company’s operating profits to grow by between 15 per cent and 20 per cent per annum over the next three years, as chief executive Bob Etchingham focuses on acquisitions and developing high-margin motorway service areas.

The group, which floated on the stock market in 2015 and is now valued at about €500 million by the market, raised almost €47 million through a share sale in October to help finance the purchase of a 42-site forecourt retail operation in South Carolina and a seven-site operation in the UK.

Davy highlighted Applegreen this week on its “conviction list” of 10 stocks for investors to buy into this year, saying it offers almost 30 per cent upside – the most among companies on the list.

Ireland’s largest Iseq-listed company, CRH, was the darling of the stock market in 2016, when it surged by almost a fifth on speculation that Donald Trump’s election as US president would boost infrastructure spending.

Having lost almost 8 per cent of its value last year, as investors took a more circumspect view of US construction expenditure, CRH has analysts coming out in force to draw attention to its allure, as investors tweak their portfolios at the start of 2018.

Investec counts the group – headed by Albert Manifold, the Iseq 20’s best-paid chief executive, whose remuneration reached €10 million in 2016 – among its “top picks” for 2018. CRH returned to the mergers and acquisitions (M&A) trail last year, after taking a breather following a record €8 billion of deals in 2015.

In October, the group committed to buying the fifth-largest US cement manufacturer, Ash Grove, for $3.5 billion (€2.9 billion), and invested $750 million on another cement deal in Florida. Earlier this week, it closed the $2.6 billion sale of its unwanted US distribution business, Allied Building Products, to concentrate on businesses that it can expand.

“We expect solid growth to materialise on both sides of the Atlantic in 2018 and also for price increases to show more momentum in Europe,” said Investec. “At the same time, CRH can continue to develop through M&A with a balance sheet that can support €4 billion of acquisitions.”

CRH is also on Davy’s “conviction list” and tipped by Goodbody Stockbrokers, which has highlighted the stock’s “undemanding valuation and earnings growth potential”. Davy expects Donald Trump’s sweeping US tax reforms will boost CRH’s net profits by 5 per cent this year.

Kilkenny-based nutrition giant Glanbia, which hived off its low-margin Dairy Ireland business into a joint venture in July, has lost almost a quarter of its market value from its 2017 highs, to €4.3 billion. This has been driven by concerns over dollar weakness against the euro and growing pricing competition in the US for its traditionally high-margin protein shakes and bars.

While Goodbody Stockbrokers recently cut its price target for Glanbia to €18.60, from €21, the new objective still points to about 28 per cent upside from current levels.

The brokerage’s analysts say that the downside risk to its key global performance nutrition portfolio, where brands include its Optimum Nutrition gym bunny-targeting whey protein products and thinkThin snacks, are already priced into Glanbia shares, and that it offers strong long-term growth potential.

Investec says that the stock is now “oversold” and that the sale of a 60 per cent stake in Dairy Ireland into a joint venture controlled by the group’s largest shareholder, Glanbia Co-operative Society, “transformed” the group.

Meanwhile, Merrion Capital has called Glanbia its standout large-cap stock at the start of 2018, predicting it may rise more than 20 per cent in value within the next 12 months.

Insulation boards manufacturer Kingspan, whose 41 per cent share price gain in 2017 made it among the top performers on the Iseq 20 index, is also expected by analysts to put in another strong performance this year.

“The constant stream of earnings upgrades sets Kingspan apart from its peers and is reflected in the significant earnings outperformance in recent years,” Davy said. While the stock is “rarely, if ever, cheap on conventional measures,” its growth prospects “justify its position on our conviction list,” the brokerage said.

Trading profit growth at Kingspan has averaged almost 30 per cent a year over the past five years. Last year, it has managed to shrug off concerns about Brexit, even though UK activity has slowed recently, as well as raw material shortages and pricing pressure. The group said last month that it had committed more than €620 million to 10 acquisitions during 2017.

“We believe the stock is the quality play amongst building material companies and should remain a core holding in portfolios as a result,” Goodbody said in a 2018 outlook report.

Investec is also a fan, saying it is “growing at several times the underlying growth rate of the global thermal building insulation market”. However, the brokerage’s €40 price target on stock is only about 6 per cent above its current level.

C&C Group, the worst performer on the Iseq 20 last year, is also the lowest-rated stock on the index, with 57 per cent of analysts who cover it attaching a “sell” or equivalent rating, according to Bloomberg data.

The 26 per cent fall in its value was driven as it reported declining volumes for its Bulmers and Magners cider brands (with the former hit by stiff competition in Irish pubs from Heineken’s Orchard Thieves), sterling weakness against the euro and the ongoing woes of its US cider business, where it booked a €129 million asset impairment charge last year.

However, Merrion Capital is pushing the stock as a “buy”, highlighting the group’s strong ability to generate cash, recent returns to investors through share buybacks and solid dividends, and the prospect of the appointment of Jonathan Solesbury as chief financial officer in November helping to “steady the ship”.

The investment firm says that 2018 may see currency worries fade and the possibility of the company’s two largest shareholders – Southwestern Concentrated Value Fund and Brandes Investment Partners, who have increased their stakes last year – taking “more of an active interest in the direction of the company in the year ahead”.

Permanent TSB (PTSB), where 75 per cent of shares remain in the hands of the State, was firmly out of favour last year, losing almost a fifth of its value, as analysts fretted about the bank’s plans to sell billions of euro of non-performing loans under regulatory pressure.

Keefe, Bruyette & Woods, a US brokerage that helped with PTSB’s re-flotation in 2015, warned in November that the bank faces the risk of needing to raise additional capital as it sells bad loans at discounted prices.

The group has the highest ratio of non-performing loans among Irish retail lenders, at 28 per cent, with almost half – or €2.68 billion – of these classified as being “untreated”, either because the bank can’t find a workable restructuring solution or the borrowers haven’t been engaging.

Some 22 per cent of analysts covering the stock have a “sell” recommendation, with only 11 per cent pitching it as a “buy”. Still, the shares have rallied to €2.22 apiece – giving PTSB a market value of €1 billion, from a low in September of €1.65.

Bank of Ireland’s shares turned in a flat performance last year, as some investors switched into AIB as the latter returned to the main Dublin and London markets in Europe’s largest initial public offering of 2017.

A fifth of analysts that cover Bank of Ireland have a “sell” rating, according to Bloomberg, while 45 per cent have a “buy” stance. The general view among analysts is that Bank of Ireland is more exposed to Brexit – with about 40 per cent of its loan book in the UK – than AIB, while it is also viewed to have a lower amount of “surplus capital” that could be returned to investors in time.

However, Investec is pushing Bank of Ireland among its top large-cap recommendations for 2018, as the group’s new chief executive, Francesca McDonagh, who took over in October, settles in and it gives further detail of the benefits from its current €900 million information technology overhaul programme. The lender is also preparing this year to pay its first dividend in a decade.

Bank of Ireland “looks well positioned for a rebound”, according to Investec.

Aryzta lost as much as 38 per cent of its value last year as the group said goodbye to its long-standing chief executive, Owen Killian, and two other top executives after the baked goods maker issued a massive profit warning in January – the latest in a series of negative announcements in two years.

However, the stock staged a rally toward the back end of 2017, reducing its full-year loss to 18.5 per cent, amid signs that chairman Gary McGann and his new chief executive, Kevin Toland, were steadying the group, as the group secured a €1.8 billion five-year bank facility and focused on plans to reduce its debt pile.

Goodbody Stockbrokers has called Aryzta one of its top “buy” food and beverage stock recommendations for 2018.

“For Aryzta, we believe the upside is significant,” said Goodbody. “Under the new management team, while every effort is being made to stabilise the operating performance, a clear focus has been on cash flow generation.”

The group has committed to raising €1 billion by the end of the decade through asset sales and cash generation from its remaining operations.

Over 13 per cent of 15 investment banks and securities firms that cover the stock continue to have a “sell” rating on Aryzta, while more than half have a hold stance and only a third rate it an outright “buy”.