Closer to home, IPL Plastics and Digicel could also make the move this year 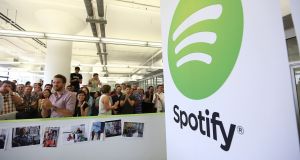 According to reports, music streaming platform Spotify has filed for its IPO, aiming to make its stock available as a direct listing in the first half of 2018. Photograph: Mario Tama/Getty Images

Companies flocked to the stock markets last year in their highest numbers since the financial crisis, with the parent of US mobile messaging app Snap and AIB among the biggest flotations as 1,700 deals raised almost $200 billion globally.

The number of initial public offerings (IPO) marked a 44 per cent increase over 2016, according to Dealogic research. Market players are expecting another bumper year this year.

It emerged this week that Spotify, the music streamlining service, confidentially signalled to US authorities in late December that it plans to float on the New York Stock Exchange in the first quarter of this year. The group will not be using the transaction to raise fresh cash, but give existing investors a market to trade their stock.

Data-sharing company Dropbox, valued at $10 billion when it last raised money privately in 2014, is expected to IPO in the first half of this year and Airbnb, the short-term property rental service founded in 2008, is also hotly tipped to debut on the stock market.

However, Saudi Aramco is what has most investment bankers salivating as state-owned Saudi Arabian oil giant is set to become the most valuable company in the world – at more than $2 trillion (€1.7 trillion) – with its expected flotation this year. iPhone maker Apple currently has the highest market value globally, at about $875 billion. The Saudis only plan to list a 5 per cent stake in Aramco.

Closer to home, IPL Plastics, the Dublin-based plastics group formerly known as One51, is eyeing an IPO in Ireland and Toronto by the end of the year, which could value the group at more than €500 million.

However, the much-anticipated 2018 third flotation of Eir was killed off last month as two companies controlled by French billionaire, Xavier Niel, agreed to buy almost two-thirds of the telecommunications group. One of the two firms, Paris-listed Iliad, has an option to buy most of the other’s shares in 2024.

The former State-owned phone company’s first flotation in 1999, under the name Telecom Éireann, resulted in hundreds of thousands of small shareholders suffering large losses, while its re-listing, as Eircom in 2004, proved short-lived, as was bought out for a second time by private equity investors. An attempt at a third IPO in 2014 was aborted by its shareholders, mainly hedge funds.

However, Denis O’Brien’s telecoms company Digicel, which pulled a planned flotation in late 2015, may look at another approach to the market this year, if an ongoing cost-cutting programme underpins a fledgling rebound in earnings reported by the group in recent quarters. Digicel operates in 31 markets across the Caribbean, Central American and Asia-Pacific regions.

Stripe, the seven-year-old digital payments company founded Limerick brothers John and Patrick Collison, has long been mooted an IPO candidate. A private fundraising in last 2016 put a $9.2 billion valuation on the group and made billionaires out of the two 20-somethings. However, Patrick Collison, group chief executive, said in October that the company is still at an “early stage” and is “years away” from going public.

Meanwhile, Africa-focused explorer T5 Oil & Gas, founded by a group of former Tullow Oil directors including its former chairman Pat Plunkett, is said to be preparing to float this year.