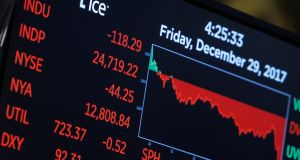 The Dow Jones Industrial Average had been hovering near the 25,000 mark on Wednesday. Photograph: Andrew Kelly/Reuters

The Dow Jones Industrial Average sailed past the 25,000-mark for the first time on Thursday, while other major indexes rose to new highs after a strong private jobs report added to a bullish sentiment from indications of robust growth in major economies.

The ADP National Employment Report showed that US private employers added 250,000 jobs in December, marking the biggest monthly increase since March, and much above the 190,000 job additions forecast by economists polled by Reuters.

A more comprehensive non-farm payrolls report on Friday is expected to show the economy added 190,000 jobs in December, down from the 228,000 additions in November.

The Federal Reserve affirming its view of gradual interest rate hikes this year in minutes released on Wednesday also supported the sentiment.

Seven of the 11 major S&P sectors were higher, led by gains in the financial index.