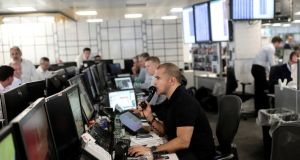 Brokers on the dealing floor at ICAP in London: a rise in oil majors helped pushed the UK’s top share index to an all-time high on Thursday. Photograph: Simon Dawson/Reuters

Irish shares rose to an eight-month high on Thursday, driven by CRH, Kingspan and Bank of Ireland, as equity markets globally surged on the back of strong data from the world’s largest economies.

The Iseq overall index advanced 0.8 per cent to 7,126.57, a level last seen in May, while the pan-European Stoxx 600 index added 0.9 per cent, the FTSE 100 hit a record high and the Dow Jones Industrial Average in New York broke the 25,000-point level for the first time.

A US report published on Thursday showed that private employers in the economy added 250,000 jobs in December, the biggest monthly increase since March. Meanwhile, China’s services sector activity hit its highest level in more than three years, manufacturing data from Japan came in strong, and euro zone surveys showed the bloc enjoying its strongest run in nearly seven years.

CRH jumped 2.9 per cent to €30.85 as analysts at Davy said that the group’s net profits this year may rise by an additional 5 per cent on the back of tax reforms enacted in the US just before Christmas.

Dublin-based DCC rose by as much as 1.2 per cent in London as the fuel distribution-to-IT services group entered the German liquefied petroleum gas (LPG) market through an acquisition estimated to have cost up to £80 million (€89.8 million).

A rise in oil majors helped pushed the UK’s top share index to an all-time high on Thursday but below the level enjoyed by its European peers, as retailers hurt after a Debenhams profit warning and house prices weighed on the real estate sector.

The FTSE 100 index closed up 0.3 per cent at 7,696.50 after hitting a record of 7702.11 points after surveys showed Britain’s dominant services sector rebounded strongly last month.

A rally in cyclical sectors such as financials and energy drove the market, with BP and Shell rising 1.1 per cent and 1 per cent respectively.

The mood was less positive among retail stocks, however, as shares in small cap Debenhams closed down 14.7 per cent after a profit warning following a difficult Christmas trading period. Marks & Spencer was also down 3.6 per cent.

Banks Santander, BNP Paribas and ING were among the top boosts to the European market as increasing enthusiasm about the euro-zone’s recovery helped push money into financial stocks.

Erste Bank, Credit Agricole, UBI Banca and Natixis gained from 3.4 per cent to 5.1 per cent.

Remy Cointreau was a rare laggard, down 2.9 per cent after Investec downgraded the stock, saying Chinese anti-corruption measures could affect consumption of costly status symbol products such as cognac.

The Dow Jones Industrial Average broke above the 25,000 level for the first time, propelled by the strong US private jobs numbers that added to a stream of robust economic data from across the world.

Banking giants Wells Fargo and JP Morgan rose after the strong data raised the odds of a US interest rate hike in March.

Macy’s shares fell 7 per cent after reporting only modest growth in holiday sales and said it would close stores and slash thousands of jobs this year.

1 Ireland faces 'deep downturn' this year and may not rebound until 2024 if there is a second wave
2 ‘The rental situation stops me moving back home’
3 John FitzGerald: Civil Service expertise key to Government policy
4 Why are markets booming when a crash is on the way?
5 How much do Irish people earn? And what will Covid-19 do to our wages?
6 Dublin consultancy Pathfinder set for expansion after buyout by Sia Partners
7 Red tape logjam creates fear for Irish timber supply
8 Major works at Rosslare Europort after €30m investment from Irish Rail
9 Ryanair pilots accept 20% pay cut, airline says
10 Why UK supermarkets are not making super profits
Real news has value SUBSCRIBE