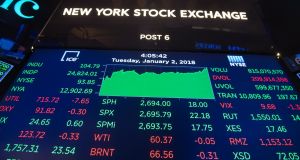 On the day Mifid II launched Ireland saw relatively strong trading volumes according to Dublin traders and the Iseq overall index closed up 0.02 per cent with Ryanair and Bank of Ireland leading the pack.

Britain’s main stock index rose 0.4 per cent to within a whisker of its recent record high, reversing an earlier swoon as oil majors jumped higher while European shares recovered on Wednesday from a muted start to the year as a rising dollar boosted exporters.

Wall Street’s main indexes hit records on Wednesday, with the benchmark S&P 500 index breaching the 2,700-mark for the first time on gains in technology stocks.

Shares in budget airline Ryanair increased by 2.09 per cent on Wednesday after the company announced that traffic in December went up by 3 per cent to 9.3 million on the same month in 2016. Meanwhile the company met the Irish Airline Pilots’ Association on Wednesday who said talks on a recognition deal were “constructive”.

Building materials group CRH saw shares advance 0.27 in Ireland after it said the €2.2 billion deal to sell off its distribution business in the US had completed. In 2016, the unit reported EBITDA of €150 million on sales of €2.3 billion, with profit before tax of €121 million.

Meanwhile, on the banking front, Bank of Ireland ended 2.43 per cent higher at €7.37 while AIB and Permanent TSB fell 0.46 per cent and 4.82 per cent respectively.

Both Hibernia Reit and Green Reit ended the day higher on relatively strong volume and were up by between 0.91 and 1.05 per cent.

Retailers stole the rest of spotlight after high-street stalwart Next delivered a strong Christmas update. Next jumped 6.7 per cent to the top of the index after its trading update surprised investors, with a sales beat driving the company to upgrade its full-year profit forecast.

The pan-European STOXX 600 index closed up 0.5 per cent while trading volumes were slightly up from the previous session despite new financial regulations kicking in.

Frankfurt’s DAX and Paris’ CAC 40 both jumped 0.9 per cent. An optimistic update from Next in the UK lifted other retailers such as Ocado, up 7.7 per cent.

British retailer Poundland, owned by troubled South African group Steinhoff which is listed in Frankfurt, said on Wednesday it enjoyed a record Christmas, with sales up 5.6 per cent in the 12 weeks to December 24th. Steinhoff increased more than 32 per cent.

Europe’s energy sector built on the previous sessions’ gains with a 1.25 per cent advance, helped by firmer oil prices which rose to the highest in 2½ years as unrest continued in OPEC member Iran.

US stocks kicked off 2018 on a strong note on Tuesday, and world markets rose to new highs on Wednesday as early indications suggested it would be another year of synchronised global growth led by a robust European economy.

MoneyGram International fell after Alibaba-owned Ant Financial’s plan to acquire the US money transfer company in a $1.2 billion (€1 billion) deal collapsed due to national security concerns.