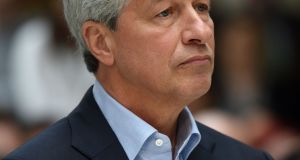 Jamie Dimon: “Blockchain is real. You can have crypto yen and dollars and stuff like that.” Photograph: Andrew Matthews/PA Wire

JPMorgan chief executive Jamie Dimon regrets having called bitcoin a “fraud” but would still not be interested in the cryptocurrency, he said in an interview on Fox Business on Tuesday.

Mr Dimon, known for his candid comments, slammed the viability of bitcoin in September. His comments were followed by a more tempered view from chief financial officer Marianne Lake, who said the bank was “very open minded to the potential use cases in future for digital currencies that are properly controlled and regulated”.

Mr Dimon and Ms Lake, however, have commended blockchain – the technology used by bitcoin and other digital currencies – a view echoed by Citigroup chief financial office John Gerspach and many others across the industry.

“Blockchain is real. You can have crypto yen and dollars and stuff like that,” Mr Dimon told Fox.

1 HSBC board rethinks overhaul and seeks even deeper cuts
2 ‘Over 1,000’ pubs have interest in Covid-19 insurance test case
3 Fruit and vegetable firm obtains interim court orders against technical manager
4 Will remote working mean an end for the corporate HQ?
5 Pricewatch: Coronavirus has given us four categories of shopper
6 Reopening economy does not cause coronavirus spike – researchers
7 EU parliament may block fund unless it has grants which do not need to be repaid
8 Player Wills site: Hines and APG to seek permission for 416 homes
9 Volkswagen agrees to compensate tens of thousands of German motorists
10 Ryanair on hook for €1bn in passenger refunds due to Covid-19
Real news has value SUBSCRIBE