Sterling weakened as investors took profits after a recent rally 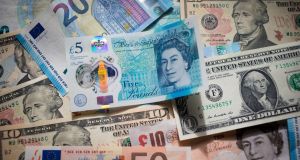 The euro extended losses from the previous session and slipped 0.38 per cent to $1.192.

The dollar climbed against a basket of major currencies on Tuesday, recovering further from last week’s decline to the lowest in more than three months, which drew bargain hunters.

The dollar index, which measures the greenback against six rival currencies, was up 0.28 per cent at 92.62. The index fell to 91.751 on January 2nd, its lowest since September 20th.

“I think we came into this week with the dollar having been beat up over the better part of the last four weeks,” said Omer Esiner, chief market analyst, at Commonwealth Foreign Exchange in Washington.

“A lot of the dollar selling that carried over from late 2017 and into this year was probably a little bit overdone,” he said.

“We are seeing a little bit of the optimism surrounding the euro fade a little,” Esiner said.

“While euro zone data continues to paint a picture of an economy that closed out 2017 with very strong momentum, there continues to be a significant lack of inflation that will ultimately keep the pace of ECB normalisation very, very cautious,” he said.

In recent weeks, the euro rallied on expectations for a shift in European Central Bank monetary policy this year, but weakened after Friday’s cooler-than-expected reading of the euro zone’s December consumer price index.

The dollar fell against the yen after the Bank of Japan trimmed its purchases of long-dated government bonds in market operations, stoking speculation the central bank could start to wind down its huge stimulus policy this year.

Since it adopted its yield-curve-control policy in 2016, the BOJ has occasionally tweaked its bond operations, with officials saying any changes are meant to keep bond yields in line with its policy goal and not to telegraph hints on its future policy.

The Japanese currency hit a five-day high on Tuesday.

Most economists surveyed in a Reuters poll in December said the BoJ would start scaling back its stimulus in late 2018 or after.

Sterling weakened as investors took profits after a recent rally although expectations that Brexit talks will have a positive outcome continued to underpin the British currency. -Reuters