The Iseq closes up slightly as Bank of Ireland, Paddy Power Betfair and Kerry all gain 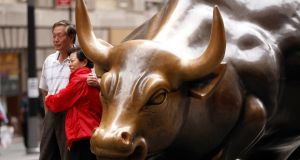 European stocks were little changed, as equities trimmed their earlier gains after it emerged the European Central Bank discussed whether interest rates can rise before its bond-buying programme comes to an end. The euro strengthened past $1.06 as a person familiar with the ECB meeting held on Thursday said officials discussed if it is possible to raise rates before stopping quantitative easing. Meanwhile, data showed US employers added jobs at an above-average pace for a second month, bolstering confidence in the economy.

The Iseq closed up a fraction as gains for Bank of Ireland, Paddy Power Betfair and Kerry offset slips for CRH and Ryanair.

CRH dropped 0.5 per cent to €32.89, while Ryanair slipped 0.4 per cent to €14.38. Drinks group C&C declined 2.5 per cent to €3.77, as it said the devaluation of sterling was having an impact on its profitability and warned that it was “not anticipating improved trading conditions in the short term”.

The FTSE 100 was boosted by gains for oil giant BP amid speculation that ExxonMobil was considering a bid. The index of blue-chip shares ended the day 0.4 per cent higher, with BP among the biggest risers after reports emerged over a potential deal.

Telecoms group BT rose 3.7 per cent after it reached an agreement with regulator Ofcom to legally separate its infrastructure arm Openreach, after two years of tension over the move, which was ordered by Ofcom.

Oil and gas stocks were the top sectoral gainers. Oil trader Glencore and producer Royal Dutch Shell both rose more than 1 per cent, but came off highs as oil prices reversed earlier gains in a volatile session.

Lloyds Banking Group shares rose despite news that the lender has paid an extra £350 million (€398 million) to cover mis-sold payment protection insurance (PPI) claims, bringing its total bill for the scandal to £17.3 billion.

Investors were also poised for the triggering of Article 50 which could reportedly take place as early as Tuesday, putting much-anticipated Brexit negotiations in motion.

The Dutch AEX Index rose above its 2015 closing high and headed for its highest level since December 2007. Dutch company Akzo Nobel rose 4.6 per cent after newspaper Het Financieele Dagblad reported PPG Industries is preparing a second bid for the paints and coatings maker. PPG’s first unsolicited €20.9 billion bid was rejected by Akzo Nobel.

Wall Street stocks rose but then pared gains after jobs data cleared the way for the Federal Reserve to raise interest rates without pushing it to accelerate the pace of future tightening.

While a new jobs report showed robust hiring and strong wage gains, the pace might not be fast enough to force the Fed to accelerate its timeline for future rate hikes.

The yield on the US Treasury note due in a decade slipped to 2.59 per cent. It climbed five basis points Thursday to exceed the 2.6 per cent mark that Bill Gross, the bond-market veteran at Janus Capital Management, said will signal the start of a bear market, should it hold on a weekly basis.