MSCI’s broadest index of Asia-Pacific shares outside Japan rose 0.6% after inching back 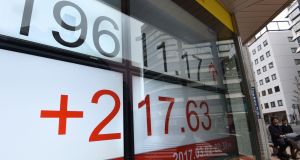 The Tokyo Stock Exchange in front of a securities company: Tokyo stocks rose during the morning trading based on renewed hopes for US president Donald Trump’s economic growth plans. Photograph: Toru Yamanaka/AFP/Getty Images

Asian shares rose on Tuesday, diverging from New York markets that slipped on concern about US president Donald Trump’s ability to focus on economic policies.

Oil prices were slightly lower amid fears that US production will offset Opec cuts. Futures are pointing to a positive open for Britain’s FTSE 100 and France’s CAC 40. MSCI’s broadest index of Asia-Pacific shares outside Japan rose 0.6 per cent, after inching back in early trade.

Japan’s Nikkei closed down 0.2 per cent while Australian shares ended up 0.3 per cent. They opened soft and moved up on expectations that the central bank’s policy meeting would leave its interest rate unchanged at 1.5 per cent, which it did. The Australian dollar jumped 0.5 per cent to $0.762. On Monday, US share indexes posted losses of as much as 0.37 per cent.

Tuesday’s reversal in Asian shares “was a little bit surprising”, said James Woods, global investment analyst at Rivkin in Sydney. He attributed the changed course partly to views that Trump is now “making progress on his promises”, citing movement toward repealing Obamacare.

“The other part is the technical aspect,” Woods said. “Things are looking positive; we’re seeing positive data reports, so investors are taking the dips as buying opportunities.”

In the US, Republicans on Monday unveiled legislation to dismantle the Affordable Care Act, calling for an end to health insurance mandates and rolling back extra healthcare funding for the poor. Congressional Democrats denounced the plan, saying it would hurt Americans by requiring them to pay more for healthcare, to the benefit of insurers.

Trump’s allegations over the weekend that he was wiretapped by his predecessor, Barack Obama, without offering any evidence, also raised concerns about the president’s ability to focus on his promised economic measures, including tax cuts and a boost to infrastructure spending.

The euro rose almost 0.1 per cent to $1.0589, following a 0.4 per cent slide on Monday after former French prime minister Alain Juppé ruled out standing in the country’s presidential elections.

On Monday, European stocks posted losses, with Deutsche Bank’s falling 7.9 per cent, the biggest drag on the FTSEurofirst 300 index, after the German lender unveiled an €8 billion cash call as part of a major reorganisation. But declines were limited by deals between French carmaker PSA Group and General Motors, and between Standard Life and Aberdeen Asset Management.