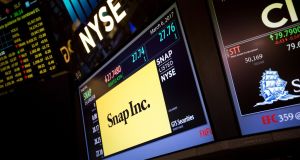 Snap shareholders will be bracing themselves for further falls on Wednesday. The stock tumbled 12 per cent on Tuesday and traders raced to position themselves to cash in on further declines after analysts gave the company a lukewarm reception following its red-hot market debut.

Snap’s $3.4 billion public listing on Thursday was the hottest technology offering in three years, but its lofty valuation and slowing user growth have raised eyebrows on Wall Street and attracted traders who expect its shares to fall.

Opening up the potential for more volatility, the company’s underwriters have exercised an over-allotment option to buy an additional 30 million shares, bringing the total IPO to 230 million shares, according to two capital markets sources familiar with the deal.

That means Snap’s bankers would no longer be in a position to stabilise its shares by buying them should they fall below their $17 IPO price. Institutional traders were paying annualised interest rates between 15 per cent and 40 per cent to be among the first to short-sell the stock, according to S3 Partners, a financial analytics firm.

Much of last week’s frenetic trading in Snap has yet to settle, making it difficult for brokers to estimate how many shares are available to lend to short sellers. But early data suggests brokers are facing a “chaotic” lending environment, with early short interest approaching $300 million, said S3 Partners managing director of research Ihor Dusaniwsky.

“This is the first couple of days of shorting data to show up, so I’m sure this is going to get bigger quickly,” Dusaniwsky said. Short-sellers borrow and then sell stocks they think will fall in value, hoping to profit by buying the stock back more cheaply later on and then returning it to its owner.

Snap has been heavily traded since its market debut, rolling over the number of shares sold in the IPO more than twice. Options trading in Snap is expected to start on Friday, once regulatory requirements are met. At about $27 billion, Snap’s market capitalisation remains a little larger than Kellogg Co and slightly smaller than HP Inc.

So far, no analysts have initiated the stock with a “buy” rating.