Sterling falls for third day, touching a seven-week low against the dollar 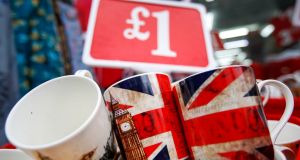 Sterling fell against most of its major peers on Wednesday morning as it cemented its position as 2017’s worst-performing Group-of-10 currency. Photograph: Luke MacGregor/Bloomberg

The pound fell for a third day on Wednesday morning, touching a seven-week low against the dollar, before a UK budget that analysts say will do little to support the beleaguered currency.

Sterling fell against most of its major peers as it cemented its position as 2017’s worst-performing Group-of-10 currency before the UK triggers its exit from the European Union. That process has been further complicated this week after prime minister Theresa May lost a second vote in the House of Lords over the conditions to her draft law to start the Brexit process, setting the stage for further tussles before article 50 can be invoked. – (Bloomberg)

2 Deutsche Bank under pressure over derivatives sales in Spain