US and European shares make sluggish start to week 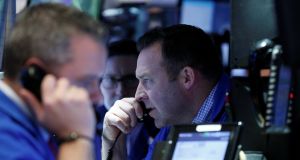 US and European equities are moving lower, encouraging flows into sovereign debt, after Asian markets were rattled by North Korea firing missiles into the Sea of Japan.

US president Donald Trump’s latest spat with his country’s security services may also be dampening the mood somewhat as markets continue to price in a probable rate rise by the Federal Reserve next week.

US index futures have been lower throughout Monday, and the S&P 500 is consequently opening down 0.4 per cent to 2,373 as trading gets under way in New York.

South Korea’s Kospi composite index fell as much as 0.5 per cent after news of the missile launch broke. Lotte Shopping, the retail arm of South Korea’s fifth-largest conglomerate, sank 4 per cent on reports that some of the company’s shops in China had been shut by authorities after it agreed last week to provide land to host a US missile defence system.

However, Lotte closed down just 0.5 per cent and the Kospi also recovered to trade up 0.2 per cent as stoic investors noted that the actions by North Korea were just the latest in a long line of provocations.

The Korean currency remains under pressure, however, weaker by 0.2 per cent at 1,153.15 won per US dollar.

The fall in US equity futures came as traders got the first chance to react to news that US president Donald Trump has accused the Obama administration of tapping his phones in the run-up to November’s election.

James Clapper, the top US intelligence official in 2010-2017, said on Sunday that there was no wiretapping of Mr Trump or his campaign during his tenure.

Paul Donovan, strategist at UBS, indicated that such a febrile Washington had made a number of investors nervous.

“There are some signs of deteriorating relations with President Trump and Republican members of Congress,” he said. “Congress is needed for the market-friendly parts of the policy agenda – and that’s relevant to markets.”

Consequently, after Wall Street hit a record high last week – partly, it was claimed, on the back of Mr Trump delivering a more “presidential” speech to lawmakers – the latest brouhaha is seen as giving investors the opportunity for some more profit-taking after the strong bull run.

This is making an impact on Europe, where the Stoxx 600 index is off 0.5 per cent as dealers also welcome news of an £11 billion merger in the asset management sector, but react negatively to Deutsche Bank’s plan to raise €8 billion as part of a restructuring programme.

Asia-Pacific reactions to events on the Korean peninsula were ultimately muddled. In Tokyo, the broad Topix index was off 0.2 per cent, led by declines in financial and utilities stocks, but Hong Kong’s Hang Seng index added 0.2 per cent as casinos pushed higher following data last week showing that Macau gambling revenue had increased more than expected.

Australia’s S&P/ASX 200 index rose 0.3 per cent as shares in miners got a boost. Rio Tinto was firmer after the company said it had delayed bonuses to former chief executive Sam Walsh as authorities reviewed a questionable payment made to a consultant.

The US dollar is mixed after last week coming within about 2 per cent of a fresh trade-weighted 14-year high on surging expectations that the Federal Reserve will tighten policy next week. The CME Group’s FedWatch tool sees an 86.4 per cent chance that the central bank will raise interest rates by 25 basis points on March 15th, the probability having more than doubled in recent weeks following supportive economic data and hawkish comments from Fed officials.

The dollar is up 0.2 per cent against the euro at $1.0602 as the single currency falters following news that Alain Juppé will not replace François Fillon as the centre-right candidate in the French presidential election, which kicks off with a first-round vote in late April.

Sterling is off 0.2 per cent to $1.2270 as Brexit concerns linger, while the Australian dollar is adding 0.1 per cent to US$0.7605, after data showing that Aussie retail sales returned to growth in January.

The Japanese yen is displaying a modicum of its traditional havens status amid the geopolitical stress, strengthening 0.3 per cent against the dollar to ¥113.70.

The yield on US 10-year Treasuries, which move opposite to the bond price, are down one basis point to 2.48 per cent, while equivalent-maturity German Bunds are easing two basis points to 0.33 per cent.

However, the US two-year yield, which is sensitive to monetary policy and which on Friday hit a seven-year intra-day high of 1.345 per cent as rate hike expectations grew, is barely changed at 1.31 per cent.

Gold is unable to feast on the geopolitical angst, nor the easing interest rates, and instead is hobbled by the recently firmer dollar, the bullion shedding 0.2 per cent to $1,231 an ounce.

Oil prices are little changed as the main contracts continue to meander within the roughly four-dollar channels they have held all year, becalmed by Opec production cuts being countered by higher US output.

The nudging lower of China’s growth target is weighing on base metal prices.