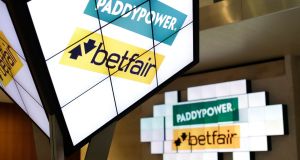 Declines in healthcare shares sent European bourses lower for a fourth day after US president Donald Trump vowed to lower the cost of medicines.

In London the FTSE 100, steadied at the close with negative share moves on poor earnings updates offsetting gains in some firms that advanced on the back of a weaker pound.

US stocks fluctuated about 1 per cent below all-time highs, while treasuries and the dollar churned in place, as investors came to terms with the likelihood that US interest rates will rise next week.

Ryanair also struggled throughout the session, opening down close to 1.5 per cent. It never regained any of this ground.

Two of the property REITs, Green and Irish Residential, both performed strongly. Green rose by 1.3 per cent while IRES climbed 2.5 per cent as investors remain positive on the prospect for returns from the property market.

Fund manager Standard Life was also among the top fallers, down 3.8 per cent, snapping a five-day winning streak after excitement over its plans to merge with Aberdeen Asset Management.

Insurer Direct Line was down 2.9 per cent after its results were slightly dented by the UK government’s decision last week to cut the discount rate with which personal injury claims are calculated.

Temporary power provider Aggreko slumped 12.9 per cent, the top mid-cap faller, after it said it expected lower profit this year and posted a 3 per cent decline in full-year revenue due to low oil prices and adverse currency impact.

Italian TV towers companies EI Towers and Rai Way both rose 5.3 per cent after local newspaper Il Messaggero said Rai Way had mandated Citi to examine a possible takeover of its rival after a failed attempt to merge in 2014.

Eight of the 11 major S&P indexes were lower as investors braced for an interest rate hike next week.

Johnson & Johnson was the top drag on the S&P 500 and the Dow Jones Industrial Average, while Amgen weighed the most on the Nasdaq.

However, a 0.4 percent advance in the S&P technology sector , led by gains in Apple and Microsoft, helped offset the impact of the decline in drug stocks.

Newly minted shares of Snapchat owner Snap fell 8.5 per cent to $21.70 after a group representing large institutional investors asked stock index providers to bar the company and others who sell non-voting shares from their stock benchmarks.

Nimble Storage soared 45 per cent after Hewlett Packard said it would buy the data storage provider for $1.09 billion in cash. HPE’s stock was marginally lower.

Dish Network was up 4.4 per cent at $63.98 after the satellite TV company was picked to join the S&P 500. – (Additional reporting: Bloomberg/Reuters/PA)