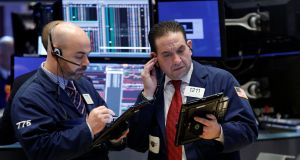 Traders on the floor of the New York Stock Exchange in New York. The S&P 500 and the Dow Jones Industrial Average swung between losses and gains on Wednesday. Photograph: Brendan McDermid/Reuters

European stocks closed little changed, halting a four-day losing streak, as gains in banks were tempered by losses in energy and mining shares.

The pan-European Stoxx 600 Index added 0.2 per cent at the close.

The Iseq index of Irish shares outperformed the wider European market, adding 0.5 per cent to 6,636.08 as Bank of Ireland joined in a rally across banks internationally, fuelled by stronger-than-expected US jobs data which raised expectations that the US Federal Reserve will hike interest rates next week.

The ADP National Employment report on Wednesday showed the US private sector added 298,000 jobs last month, much more than the 190,000 estimated by economists on average.

The bank rose 2.2 per cent to 23.2 cent, while insurer FBD climbed 1.9 per cent to €8.05 amid hopes that its investment portfolio will be able to benefit from rising bond yields as US interest rates ratchet higher.

However, Permanent TSB was unable to join in the fun, falling 2.5 per cent, after the group posted a net loss of €266 million, weighed down by higher-than-expected exceptional costs.

Providence Resources jumped 12.6 per cent to 19.6 cent after agreeing a farm-in deal with a unit of Cairn Energy for work on one of its exploration prospects about 220km off the southwest coast of Ireland.

The FTSE 100 in London dipped by 0.1 per cent to 7.334.61 as investors were disappointed by the UK’s spring budget, delivered by chancellor Philip Hammond, failed to provide much by way of Brexit details.

Legal & General shares dropped 1.6 per cent, even though the insurer revealed it posted a 17 per cent surge in pretax profits last year.

Mining stocks were also on offer as a rising US dollar hit dollar-denominated metal prices Shares in Anglo American dropped 1.8 per cent, while BHP Billiton fell by 1.2 per cent.

Bucking the trend, G4S shares jumped 8 per cent as the security and outsourcing group reported a 14 per cent increase in underlying pre-tax profits for 2016.

The Stoxx 600 has lost steam after reaching a 15-month high last week on surging bets for a Federal Reserve interest-rate increase.

Deutsche Bank gained 1.9 per cent, snapping a four-day drop, as investors continued to digest the group’s plans to raise €8 billion from shareholders.

Oil fell to a one-month low after government data showed US crude stockpiles climbed to a record last week, weighing on energy-related stocks.

Personal and household goods shares rose, with Adidas jumping 9.4 per cent after raising its sales and earnings forecasts through 2020.

Electricite de France was the worst performer among Stoxx 600 firms, dropping 7.9 per cent after the French government sold a portion of its rights to participate in a €4 billion share sale at a discount.

At the European Central Bank’s meeting on Thursday, no major changes to policy are expected by analysts. However, economists predict that the ECB will announce a change to its €2.3 trillion quantitative easing bond-buying programme in September.

The S&P 500 and the Dow Jones Industrial Average swung between losses and gains on Wednesday as gains in financials following a strong private sector hiring report were offset by declines in energy stocks.

Banking stocks, including Citigroup, Bank of America and Wells Fargo, were in demand as traders have priced in an 87.5 per cent chance of a US rate increase, up from 30 per cent at the start of last week following hawkish comments from a host of Federal Reserve officials.

However, Caterpillar fell 1.6 per cent after the New York Times said it reviewed a report commissioned by the US government that accused the heavy equipment maker of carrying out tax and accounting fraud.

Urban Outfitters was the biggest percentage loser on the S&P, with a 4.8 per cent decline following a sales miss that prompted analysts at William Blair to downgrade the stock and other brokerages to cut price targets.