Investors hold fire ahead of Fed meeting as stocks retreat 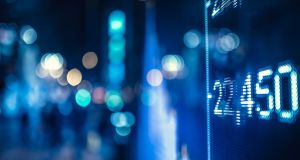 Investors were in a holding pattern ahead of a Federal Reserve meeting in which policymakers are widely expected to raise interest rates, with global stocks directionless after retreating from a record high.

Stocks in Europe fluctuated after four days of losses, with the Stoxx Europe 600 little changed at 8.31am in London.

Asian stocks fell amid lower trading volume, with the MSCI Asia Pacific Index down 0.1 per cent. The Topix retreated even as data showed Japan’s economy expanded more than initially reported in the fourth quarter, with the index dropping 0.3 per cent and retreating for the third time in four days.

Chinese shares traded in Hong Kong increased 0.5 per cent, while the Hang Seng index added 0.4 per cent, as a report showed imports surged on seasonal factors.

The British pound slid as investors standby to hear chancellor of the exchequer Phillip Hammond’s spring budget today. The yield on 10-year UK treasury notes climbed for an eighth session. Crude fell below $53 a barrel.

Trepidation is setting in after one of the steepest post-election rallies in history drove the value of global equities toward $71 trillion amid optimism US president Donald Trump can spur growth with huge spending projects and lower taxes. That pushed valuations on the MSCI all country world index to the highest since 2015, approaching the most expensive ever.

Data from Tokyo showed Japan’s economy has expanded for four consecutive quarters, the longest run in more than three years. But the growth has been modest and mostly driven by exports, while private consumption internally remains soft. China’s imports jumped 44.7 per cent while exports rose 4.2 per cent in February in yuan terms, though the results were skewed because of the timing of the week-long lunar new year holiday.

Expectations for swings in prices of bonds, currencies and stocks are all falling. Ever since Mr Trump gave his speech to a joint session of Congress last week and Fed officials, including New York Fed president William Dudley, heightened the odds of an interest-rate hike this month, measurments of volatility have plunged across the board.

Contracts on the SandP 500 slipped 0.1 per cent. The benchmark index lost 0.3 per cent on Tuesday, completing the first back-to-back declines since January. Healthcare shares declined after Republicans released details of a replacement for Obamacare and Mr Trump tweeted about lowering drug costs for Americans.

4 What was the world’s best-selling luxury car brand in 2020?

5 Eir decides against passing on VAT reduction to customers

6 Dior to open boutique in Brown Thomas later this year