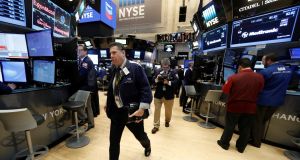 Traders on the floor of the New York Stock Exchange. US stocks were little changed on Thursday as gains in bank stocks were countered by the second day of losses in energy shares. Photograph: Brendan McDermid/Reuters

Banks rallied, leading gains among industry groups, after Mr Draghi acknowledged that the cyclical recovery may be gaining momentum, saying there is no longer a “sense of urgency” prompted by deflation risks.

The euro gained against the dollar as a result, rising above the $1.06 level during Mr Draghi’s remarks, reversing earlier selling that had brought it to a six-day low.

The Iseq rose 22 points to 6,658 in tandem with other European bourses. Neither of the two Iseq-listed banks benefited much from the rally in financials across Europe. Bank of Ireland rose by a meagre 1.3 per cent to 23.5 cents while rival Permanent TSB fell nearly 3 per cent to €2.65.

Providence Resources continued its good run to hit 20 cents. The explorer this week announced it had agreed a farm-in deal with a unit of Cairn Energy for one of its southwest prospects.

Ryanair rose nearly 3 per cent to close at €14.45 as oil slid below $49 a barrel for the first time this year.

Packaging group Smurfit Kappa, meanwhile, fell 1.3 per cent to €25.19 in line with the slump in commodities.

Investors checked out of Morrisons on Thursday after the supermarket giant sounded a note of caution over the cost impact from the Brexit-hit pound. The FTSE 100 Index was down 19.65 points to 7,314.96, with the Big Four grocer weighing on the London market after warning of the “impact on imported food prices if sterling stays at lower levels”.

Insurers Aviva and Admiral were among the biggest risers despite a strong contrast in their full-year results. Shares in Aviva rose 6 per cent, or 33p, to 544p, after pledging to hand more cash to shareholders and announcing a hefty jump in profits.

Investors were also upbeat about Admiral despite the car insurer warning over price hikes as annual profits tumbled by a quarter. The Cardiff-based group said it had already taken “pre-emptive” action to increase prices last December with “more to follow” as it looks to recoup a £150 million hit following a government cut to the so-called Ogden discount rate calculation.

Stoxx 600 lenders closed at the highest level in three weeks, offsetting losses in miners, the worst performers in the regional benchmark.

Among shares active on corporate news, Akzo Nobel jumped 13 per cent after the coatings company rejected an unsolicited €20.9 billion takeover bid from PPG Industries and said it may separate its specialty-chemicals business to boost the stock price.

French publisher Lagardere was the second-best performer, up 10.3 per cent, chalking up its best daily gains in more than eight years, after a top-ranked Barclays analyst raised his rating on the stock, citing cash flow achievement.

The heaviest Stoxx faller was Domino’s Pizza, down 13.2 per cent after disappointing results.

US stocks were little changed on Thursday as gains in bank stocks were countered by the second day of losses in energy shares, a day before the crucial monthly jobs report that would bolster already sky-high odds of a rate hike next week.

Fuelling the rise in bank stocks was a report that showed the number of Americans applying for unemployment benefits rose to 243,000 last week, but remained below 300,000 for the 105th week.

Johnson & Johnson was the top boost to the broader US index and the Dow, up 1.2 per cent after Jefferies raised its price target on the healthcare conglomerate’s stock.

Apple was the top drag on the S&P and the Nasdaq, slipping 0.4 per cent on chatter that iPhone 8 launch could be delayed.

Signet Jewelers was the biggest percentage gainer on the S&P, with a near 8 per cent rise after the company reported a quarterly profit above analysts’ expectations.