Stocks slide back in Europe and the US 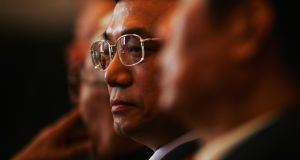 Commodity-driven stocks were some of the worst-performers on the blue chip index after China’s premier Li Keqiang said the country was aiming to expand its economy by 6.5 per cent. Photograph: Guang Niu/Getty Images

News of the €12.7 billion Aberdeen Asset Management and Standard Life merger failed to lift European markets, which fell back slightly on poor performances from the banks and resource companies.

Bank of Ireland tumbled 2.15 per cent as it emerged that US investor Fidelity had cut its holding in the Irish lender. More than 50 million of its shares changed hands in Dublin on Monday. Dealers noted that the market was waiting to see if the seller was “done or have they more to do”.

Index heavyweight, building materials giant, CRH, dipped 0.69 per cent. Bookmaker and betting exchange Paddy Power Betfair, which is due to publish its first set of full-year results following the merger that created the company, on Tuesday, was down 0.35 per cent at €101.80.

Multinational packager, Smurfit Kappa, rose 1.05 per cent to €25.44, making it one of the best performers of the Dublin market’s larger stocks on Monday.

London’s blue-chip FTSE 100 fell into the red on Monday despite investor excitement over a potential £11 billion (€12.7 billion) merger between Aberdeen Asset Management and Standard Life.

European shares pulled back on Monday with banking stocks led lower by a slump in Deutsche Bank shares after the German heavyweight lender unveiled an €8 billion cash-call as part of a major reorganisation. Losses, however, were limited by fresh deal-making activity in the auto and asset management sectors, which helped the STOXX 600 fall just 0.5 per cent and stay just over half a percentage point below a 15-month peak hit last week.

Deutsche Bank dropped nearly 8 per cent, making the stock the biggest drag on the pan-European index and pulling the European banking index down 1.2 per cent.

Peers Credit Suisse and Italy’s Banco BPM also fell more than 4 per cent. Deutsche Bank, which also announced an overhaul of its business structure and plans to list its asset management arm to help raise extra cash, will start the rights issue in two weeks.

JP Morgan hailed the new strategic direction taken by the bank as steps “in the right direction”, but kept its neutral rating on the stock, saying more details on the financial impact of the planned measures were needed.

PSA Group rose 2.7 per cent after the French carmaker agreed to buy Opel from General Motors in a €2.2 billion deal that is expected to generate cost savings of €1.7 billion.

Europe’s Basic Resources index was a weak spot, down 2.2 per cent, with big miners all down.

US stocks fell on Monday with losses across sectors as investors’ appetite for risk was curbed by geopolitical tensions in Asia and president Donald Trump’s accusation that his predecessor, Barack Obama, had wiretapped him.

Online TV streaming service Netflix was the top performer on the S&P, up 1.4 per cent to $141.15 following a UBS rating upgrade to “buy”.

Tyson Foods was down 3.1 per cent at $61.63 after a strain of bird flu was detected in a chicken flock on a Tennessee farm contracted with the company.