Covid-19 restrictions on sea swimming have been lifted, but it’s not easy to just jump in 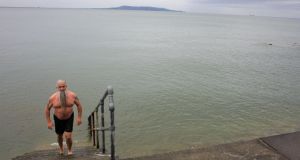 The first step is to relax and get your five litres of blood running three times around the world. Then it’s about feeling and thinking and not once conceding. Follow the rhythm – the body knows, the body is at work. Belly, chest, head. Fully in, fully charged, letting go.

Pardon me if all this reads a bit deep and meaningful, but when you’re getting back into the open seawater for the first time this year and your body fat count is still perilously close to zero, this is nothing to be shallow about. In the strictly breathing sense, that is, because among the many benefits of the gentle lifting of the lockdown this week has been learning how to properly do it all over again.

“Take some deep, deep breaths, exhale slowly, and definitely don’t gasp,” said Jonathan Smith, his second last words shortly after dawn on Monday before taking his first steps back into the deep sea. We were down at Blackrock to meet the high tide and the first lifting of Covid-19 restrictions around open seawater swimming since early last month. For Smith, who would usually be down here every day of the year, it was as much a resumption of the mind and body therapy as it was the simple exercise.

Swimmers, more than most, have always known the value of proper breathing technique – in part because nothing stresses the importance of it more than a quick dip in the cold sea. Especially after nine weeks in lockdown. You can run but you can’t hide, or some metaphor to that effect.

Same with those trying to fill the unforgiving minute with sixty seconds worth of distance run, as Rudyard Kipling once so eloquently put it. “If there is one single physical factor on which success can be said to based, it is breathing,” wrote Percy Cerutty, the Australian distance running coach and regular contributor to this column. In his book Success: In Sport and Life there are five chapters dedicated to the art of proper breathing, or what he termed Tidal Breathing: “the practice of complete respiration, the full use of both the upper and lower lobes of the lung”, as opposed to the more typical “zombie-like” form associated with the sedentary lifestyle.

The benefits of deep and meaningful breathing also extend far beyond either the track or field. There is a scene in the Martin Scorsese documentary about Bob Dylan – the first one, not the second one – where Allen Ginsberg describes Dylan’s breath and voice as becoming one and the same, as if in the old shaman tradition, which allowed him to effortlessly deliver his long epic verses such as A Hard Rain’s A-Gonna Fall. Try it at home sometime.

Of all the properly breathtaking scenes in The Last Dance (and there are many), the ability of Michael Jordan to run around the basketball court with a piece of chewing gum in his mouth – before or after being seemingly frozen in one of his mid-air gravity shifts – then celebrate victory with a big fat cigar, suggested to me at least that he must have excellent control of his breathing. It certainly put fresh meaning to the term Air Jordan.

Plus, as Keith Duggan rhapsodised on these pages recently, Jordan never shut up. “He was always jawing: at opponents, at referees, at team-mates, at the old slights from his youth which he nursed and cherished and would later unveil during what was a funny, strange and bittersweet Hall of Fame speech . . .” None of that would be possible without proper breathing technique.

Concentrate on getting the air in. Air will always find its own way of getting out

For distance runners, keeping it deep and meaningful is mainly about avoiding oxygen debt. Noel Carroll, whose ability for mid-race machination was once described as “like a scene-shifter at the Abbey Theatre”, always championed the importance of proper breathing.

“Don’t worry about getting it out, concentrate on getting the air in,” he would say. “Air will always find its own way of getting out.” One of the most dominant runners of his time, Carroll ran in two Olympics over 800 metres, in Tokyo 1964 and Mexico City 1968, setting a European indoor record in 1964, winning three consecutive European indoor titles, and he knew what he was talking about.

Back to the sea, where it seems many of the breathing methods and techniques being similarly championed are those practised and preached by Wim Hof, the Dutch extreme athlete better known as The Iceman. It’s hard to find an open seawater swimmer these days who hasn’t at least heard of Hof, whose growing fanbase now includes Russell Brand, Novak Djokovic and me.

No one will last long submerged in cold water if they forget to remember how to properly breathe, and release the endorphins and adrenaline which come with it, which is more or less what the Wim Hof method of breathing comes down to.

This was no breakthrough; it was influenced by the centuries-old Tibetan Buddhist technique of Tummo meditation, and the pranayama breathing of Kundalini in the Hindu tradition, and it seems Hof knows what he’s talking about too. At age 61, his list of achievements include the longest-ever ice bath (1 hour, 52 minutes and 42 seconds), and climbing to 23,600ft at Mount Everest, wearing nothing but shorts and shoes, only falling short of the summit due to a recurring foot injury. He did summit Mount Kilimanjaro, again wearing only shorts and shoes.

In a modified form of hyperventilation, the Wim Hof method aims to super-aerate or oxygenate the blood and the body, ideally before any exercise, and especially in the cold. In 2011, American investigative journalist Scott Carney set out to expose Hof as a charlatan, only to completely fall for his method, later detailed in his book What Doesn’t Kill Us.

Hof also reckons his super-oxygenating breathing method – belly, chest, head – can suppress inflammation, boost the immune system, and possibly alleviate depression. It’s also about steering away from Freud’s Pleasure Principle, and simply tapping more oxygen into the body’s deep network of capillaries, veins and arteries which extend over 60,000 miles, hence getting those five litres of blood running three times around the world.

“And the water is not actually very cold right now,” said Smith, his last words before going back into the deep sea on Monday. Belly, chest, head. Fully in, fully charged, letting go.