So you’ve tested positive - Why Not Say What Happened? 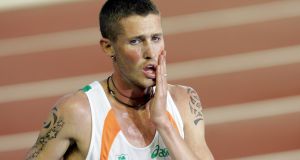 Martin Fagan’s confession in January 2012 has been one of the few efforts to come at least partly clean. Photograph: Inpho

It was Wednesday evening after the first rain in weeks when the chance presented itself. There have been precious few excursions during this lockdown beyond delivering some daily essentials to a once-close neighbour who is properly cocooned on a very large estate in Wicklow, and there’s usually something given in return.

“Bet you can’t work this into the sports pages,” he said, handing me a well-read copy of the book ‘Why Not Say What Happened?’ The cover flap was missing and in truth I’d never heard of Ivana Lowell until he briefly explained her family background and the absolute madness of it all.

Why Not Say What Happened? has nothing whatsoever to do with sport, although it does feature episodes of binge drinking and some drugs. Lowell certainly isn’t sporty either but does have some links with this part of Wicklow, her grandmother being Maureen Guinness, whose sister Oonagh was gifted the Luggala Estate by her father, later passing it down to her son Garech Browne.

Lowell has spent most of her life between London and New York with summer holidays in Ireland and her memoir, published in 2009, is by turns of the page shockingly upsetting and hilariously real. From the sexual abuse and near-fatal burns in her childhood, to the eating disorders and raging alcoholism and the quest to find out who in fact was her father, Lowell doesn’t hold anything back.

Her stepfather was the American poet Robert Lowell, and she got the title for her book from the last line in his poem Epilogue. She also dated Bob Weinstein, brother of Harvey, and the account of their wedding at the Rainbow Room in New York is utter buffoonery.

In the end it all comes across as a reminder that the truth may sometimes be stranger than fiction, or that there are some things you really couldn’t make up. Both of which were reasons for its timely reading on Wednesday evening, the day after the latest anti-doping report from Sport Ireland, capped off by the latest doping offence within the GAA.

This was my chance, because every year it seems there are parts of this report you couldn’t make up, or certainly come across as strange. Of the 1,303 anti-doping tests carried out across 36 sports in 2019 – a 17 per cent increase on the previous year – there were seven rule violations in all, four of which are still considered “pending” (including the case of Munster and Ireland rugby prop James Cronin and the mixed-up medical prescription that resulted in a positive test for a banned steroid).

The three doping cases now concluded were 21-year-old amateur wrestler Peter Newti and 31-year-old motor racing driver Stanislaw Ukieja, who both tested positive for traces of cannabis, and League of Ireland footballer Brandon Miele. He failed to submit a sample when required to do so last April, later contesting that he’d struggled to provide a full sample and then left out of concern for his four-year-old daughter after being informed by his partner that she had fallen.

In 2018, there was only one single doping case in Irish sport, amateur boxer Evan Metcalfe also testing positive for traces of cannabis at the National Elite finals, later claiming he unknowingly ingested the substance after being offered what he thought was a cigarette at a party in a friend’s house three days earlier.

Sport Ireland has been running anti-doping here since 1999, the year after one of those doping cases you still couldn’t make up: swimmer Michelle Smith, who won more individual gold medals at the 1996 Atlanta Olympics than any other athlete from any nation, producing a sample that contained an alcohol level that could have been fatal if consumed by a human.

Not forgetting the fact her sample also contained androstenedione, a metabolic precursor of testosterone. Fina – the international swimming federation – pressed for the more clear-cut charge of sample tampering, which also carried the higher punishment of a four-year ban, which is exactly what she got.

In the years since it seems the truth and fiction around doping has become increasingly blurred. Martin Fagan’s confession in January 2012, after injecting himself with EPO in his apartment in Arizona and feeling the low of the junkie, has been one of the few efforts to come at least partly clean.

Others typically resort to the old dope tricks, the sport of cycling traditionally leading the way with excuses such as the “vanishing twin” (Tyler Hamilton), the “pigeon pie” (Adri van der Poel), the “poppy seed muffin” (Alexi Grewal), and another of the “too much whiskey” (Floyd Landis). Not forgetting Chris Froome’s malfunctioning kidney.

Sex often features too. US sprinter Dennis Mitchell, who back in 1998 tested positive for testosterone but claimed that was because he’d drank five bottles of beer and had sex with his wife at least four times. His excuse was accepted by US Track and Field, although World Athletics banned him for two years.

There also my old favourite: Canada’s 2015 World pole vault champion Shawn Barber was cleared to compete in the Rio Olympics despite testing positive for cocaine at the Canadian trials, claiming it was “inadvertently ingested” during a sexual encounter with a woman he met via an on-line personals site (before later coming out as gay).

Some prefer to say nothing at all, although confirmation on Thursday that Carlow footballer Ray Walker is not appealing his four-year suspension after testing positive in February of this year for the banned substance Meldonium has presented more questions than answers. Not least how or indeed why a 35 year-old coming to the end of his career would have a heart-defect medication in his system that is not licensed in Ireland and known to be performance-enhancing under World Anti-Doping Agency Rules (Wada).

All Walker is saying is that he was talking an anti-inflammatory for an upset stomach, which seems a very long way from Meldonium, first developed by Latvian scientist Ivars Kalvins in the 1970s and intended to boost the stamina of Soviet troops fighting at high altitudes in Afghanistan in the 1980s.

Or maybe it’s all a little closer to home, Walker is the fourth GAA player to test positive for a specified banned substance, only to claim he knew nothing about it. One of these days there might be something given in return. Even if the truth is stranger than fiction, one of those things that you really couldn’t make up, why not say what happened?