Ian O’Riordan: Photo-finish in the race for best ever running film 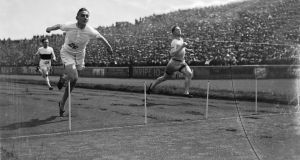 The beach running scene is still acted out along the Old Course at St Andrews and so too is the Trinity Great Court run at Cambridge. The soundtrack is entirely unforgettable and likewise some of the dialogue and of course it is very, very British.

Most runners have their own opinion about Chariots of Fire, but is it the best film ever made about running?

When you’re holed up in the mountains and the mobile wi-fi isn’t strong enough for streaming these are the sort of fun questions you have time to ask yourself. My copy has also been upgraded recently from VHS to DVD and on Thursday evening was pulled from the home library for the first viewing in what must be six months.

Chariots of Fire turns 40 next year, and while most of running scenes are more perceptively compelling than you remember, it is also wonderfully corny in parts, with some of the dramatic licence of a Cecil B DeMille film. Most of the acting is still touchingly done: just think of Eric Liddell and the lads running barefoot along the beach in that opening sequence, in slow motion, naturally.

The Lord Andrew “Lindsay” character, loosely based on the storied Lord Burghley, is exuberantly performed by Nigel Havers, especially when setting up the Trinity Great Court run against Harold Abrahams, and in that classic training session on his estate, the hurdles lined up, a glass full of champagne placed on each one, him clearing them all, although not without spilling a drop.

Later, when they all make it to the 1924 Olympics in Paris, Lord Lindsay, still gleeful about the whole thing, is loyally cheered on as he lines up for the 400m hurdles, after which he turns away to face his fellow combatants, and the daunting, open track ahead of him. We all remember what happens next, but that scene brilliantly encapsulates the essence of any sporting occasion: behind all the talk and the hoopla and all the good luck stuff comes the lonesome realisation that you’re the one who has to run the race, and the sometimes crippling responsibility that comes with it.

Anyway, the film was critically acclaimed on its release in May of 1981, and went on to win four Academy Awards, including best picture, best original screenplay, best costume design, and best original score for that still powerfully moving soundtrack by Vangelis. With some strange coincidence, the film was first conceived by producer David Puttman while he was holed up with the flu in a rented house in LA, and chanced upon Liddell’s story in an Olympic reference book.

After his success with Midnight Express, three years earlier, it was a joint British-American production, which meant the inclusion of some American actors, their top sprinter Charley Paddock played by Dennis Christopher, fresh out of Breaking Away, definitely my favourite ever film about cycling. The part of Liddell is also beautifully played by Ian Charleson, who nine years later died of Aids. Puttman also gave a part to Brad Davis, from Midnight Express, and went on to produce The Killing Fields, The Mission, and War of the Buttons, but that Academy Award for Chariots of Fire possibly sits most memorably at his home in Skibbereen.

Comparing it with your other favourite films about running is a fun way to pass time too, with another recommendation coming from nine-time Irish distance running champion Vinny Mulvey, who singled out Endurance, the 1999 biographical film about Haile Gebrselassie, with Gebrselassie playing himself, in part because Mulvey got to attend the New York premiere.

Most of the better running films are these straight-up biographies, such as the suitably titled Race, released in 2016, the latest full-length feature film treatment of how Jessie Owens went about winning his four gold medal haul at the 1936 Olympics in Berlin. Also at home here on still original VHS is Running Brave, the 1983 film based on the story of Billy Mills, the Native American Indian who won the 10,000m at the 1964 Olympics in Tokyo.

Others have broken this biographical mould, including another special favourite, The Jericho Mile, made for TV in 1979 by Michael Mann and shot entirely in Folsom Prison, before he directed The Last of the Mohicans and Heat, with a subtly brilliant supporting part played by Brian Dennehy, who died on Wednesday at age 81.

There’s also that strangely upsetting The Loneliest Runner, the semi-autobiographical film directed by Michael Landon, and my older brother’s odd favourite Clockwork Mice, from 1995, which features Irish actor Rúaidhrí Conroy, and based around the lines of first World War poet and runner Charles Hamilton Sorley: “We swing ungirded hips, And lightened are our eyes, The rain is on our lips, We do not run for prize... We run because we like it, Through the broad bright land.”

I’ve always been torn between the biographical films about the American distance runner Steve Prefontaine, who never broke a world record or won an Olympic medal, yet inspired not one but two Hollywood feature films based entirely on his running career: the 1997 Disney production Prefontaine and the 1998 Warner Brothers production Without Limits, produced by Tom Cruise, and directed by Robert Towne of Chinatown fame.

In many ways Prefontaine is to American running what James Dean is to American cinema, and these two films are one measure of the extraordinary affection an ordinarily talented athlete from Coos Bay, Oregon, still inspires.

When the 1972 Olympic trials were staged in Eugene, Prefontaine was the headline act. Wearing a pair of his coach Bill Bowerman’s custom-built Nikes, decorated for the first time with a “swoosh”, Prefontaine did not disappoint. He won the 5,000 metres in a US record 13:22.8, thus earning his ticket to Munich.

“I think, if it comes down to a true-run race, then I’m the only one that can win,” he said of his Olympic ambitions. As it transpired, it wasn’t quite a true-run race, and after leading for the last four laps, Prefontaine ended up fourth, narrowly outsprinted for bronze by Britain’s Ian Stewart (after whom, by the way, I am named).

Three years later Prefontaine was killed when he crashed his gold MG while returning from a party in the hills outside Eugene, aged just 24, just hours after he’d won a 5,000-metre race at Hayward Field. Most runners have their own opinion about these two films too, and whether Jared Leto best captured the part in Prefontaine, or Billy Crudup did in Without Limits, although I’d make it a sort of photo-finish in the end.