Tracks can earn €60k per meeting for pictures broadcast to 9,000 shops in Ireland and Britain 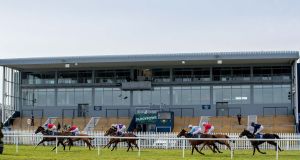 A view of the race run in front of an empty stand at Naas on March 23rd. Photograph: Morgan Treacy/Inpho

Media rights and the potential reopening in July of betting shops in Britain are emerging as key factors in the survival of Ireland’s 26 racetracks during the coronavirus pandemic.

Irish racing is set to resume behind closed doors at Naas on June 8th by which time 87 fixtures will have been lost since the sport last took place on March 24th. The majority of those are planned to be rescheduled by Horse Racing Ireland later this year.

However the industry’s ruling body is readying a multi-million euro package for racecourses and it will include a €25,000 compensation fee for any meeting a track may lose.

Prior to the Covid-19 lockdown it is estimated that a run of the mill fixture in Ireland could cost up to €30,000 to stage. However it was worth approximately twice that in terms of pictures broadcast into the near 9,000 betting shops in Britain and Ireland by Sports Information Services (SIS.)

Steaming services to online operators had also become more valuable and worth an estimated €20,000 to a track for each fixture it hosted.

With the sport cancelled for two months, and racing set to take place behind closed doors for the foreseeable future, the long-term viability of some tracks has been called into question, particularly bigger tracks that host the more prestigious fixtures with bigger attendances.

Nevertheless, for many courses, a behind closed doors model will still be financially viable if a reopening of betting shops in Britain, in particular, results in a return of media rights revenue.

That’s according to the chairman of Naas racecourse, Dermot Cantillon, who is looking forward to hosting racing’s return in just over two weeks’ time.

“It is sustainable if we have the licensed betting offices in England open. It’s different for a track like Punchestown which is dependent on a lot of corporate hospitality.

At present July 4th is the earliest that Britain’s nearly 8,000 betting shops can reopen. Some Irish betting offices are hoping to be allowed reopen here next month.

Cantillon said having betting shops placed in the ‘retail’ category of guidelines for any easing of restrictions by the British government would be “very significant” for racecourses in Ireland.

“We [tracks] will do our best to facilitate the industry. But at the end of the day it’s not sustainable if we can’t at least meet our running costs and add a bit extra to put against direct costs. For the last few months we haven’t been open but we’re still paying bills,” he said.

“I would be optimistic. I hope we can keep going behind closed doors, that we don’t have a second outbreak of the disease, that we manage it well within the industry, and in 18 months time or whenever, a vaccine comes out, or a good treatment, that we can get back to normal,” Cantillon added.

HRI’s chief executive Brian Kavanagh agreed on Friday that media rights are a “key” element for racecourses. But he also said that racing behind closed doors is not a realistic long-term proposition for the sector overall.

“It’s not sustainable in the longer term and it’s not something you would aspire to. Racing thrives on crowds and the atmosphere at the bigger meetings.

“But it’s not just festivals. Take for instance Leopardstown evening meetings during the summer, or a lot of the summer tracks that get decent crowds in the evening, that season is going to be largely behind closed doors.

“You’re talking a Ballinrobe, a Killarney, a Kilbeggan who would have significant other sources of income as well as just media rights,” he said.

Kavanagh said HRI has been told July 4th is the earliest betting shops can be reopened in Britain.

“The media rights is key. What we saw in the brief number of meetings we ran [behind closed doors] when betting shops were closed or closing was an uplift in the level of streaming and non-betting shop revenue from media rights.

“[But] for years people have been talking about the decline of the high street. But the reality over the last number of years the bulk of media rights revenue was based on betting shop revenue as opposed to streaming or international revenue,” he said.

Kavanagh stressed that HRI’s objective is to make sure none of the country’s tracks are forced to shut down because of the public health emergency, a scenario described as “not totally unrealistic” by the Association of Irish Racecourses on Friday.

“Any commercial operation, with social distancing and so on, the implications that has for economic viability are as evident on a racecourse as they are on a restaurant. You’re restricting your income stream,” said AIR’s chief executive Paddy Walsh.

“People can tolerate that for a limited amount of time and who knows how long this will go on for. There has to come a time at some stage where if you’re operating on an uneconomic basis the long-term viability of your business comes into question.”

He added that AIR are in discussions with various parties to help ease racetracks through the Covid crisis.

Meanwhile, Ireland’s European Breeders Fund will give €2.5 million in prizemoney to Irish racing this year.

The sport’s biggest sponsor is funded by contributions from Irish stallion farms and has increased its prizemoney allocation, including using money not distributed during the current suspension of racing.

The EBF chairman, John O’Connor, said: “Prizemoney is the lifeblood of racing and supports owners, trainers, jockeys and stable staff and for that reason the Irish EBF has decided to increase its allocation to HRI for 2020 to assist Horse Racing Ireland in trying to replace the lost opportunities for all the participants in Irish racing during the Covid-19 suspension of racing.

“We will encourage all of our co-sponsors to continue to support the Irish racing industry at this crucial time when the industry is facing its greatest ever challenge.”

This year will see the EBF support a news series of median races while the Ballyhane Stakes, worth €200,000, will be run at Naas on August 3rd.

“The Irish EBF have long been staunch supporters of Irish racing and as we work towards the resumption of racing it is reassuring to know that they will be there when needed,” said HRI’s director of racing, Jason Morris.

Fixture list will help police decide if Premier League matches should be at neutral venues 13:15
New Zealand could allow ‘sold out’ sports stadiums next week 08:49
Jacob Stockdale on dealing with online abuse; Seán Moran reminisces about what we’re missing 06:52
Red card replacements among new laws in New Zealand 06:17
Jacob Stockdale gives keyboard warriors the slip in textbook fashion 06:28
Here is your handy guide to sport on television this week