Mind over madness: How running became the people’s game 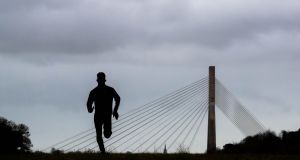 A jogger runs at the Battle of the Boyne Site in Oldbridge, Co Meath on St Patrick’s Day. Phootograph: Morgan Treacy/Inpho

It must be 50 years since our dad was running up Dundrum Road when someone shouted out their car window that he’d already passed the Mental Hospital. He was probably shifting all right, his military low arm carriage and aeronautic cheekbones giving him the look of a mad man, but some us were born and raised to believe this was already the new normal.

I was occasionally treated to similar behaviour when running out the gates of De La Salle Churchtown in my loose t-shirt and skimpy shorts. Especially when it was raining. It was more often than not just the gently mocking curiosity of some classmates as they went off to play rugby, believing that running was some sort of crippling exercise and definitely not good for the brain. Many of the teachers believed the same.

My older brother was famous in school too for his outlandish running outfits, some of which he still wears today, and there were times even our mother wondered where he was going dressed like that. And she still does.

Truth is not many people went running back then. Not unless they appeared to be escaping from some sort of Shutter Island. It used to be that anyone caught running outside without a good reason were considered to be a bit mad, a little psycho, nutty as a fruitcake, and while things have slowly changed over the years it’s taken a global pandemic for things to go full circle. Now read on.

Richard Harris always said the reason he loved coming home to Ireland was because whenever people described him as mad they meant it as a compliment. Most runners have always taken the madness side of it as a compliment too. Same as that Allen Ginsberg line, who said he’d seen the best minds of his generation destroyed by madness: runners have always read that differently, that the best minds are broadened by madness.

Still there’s always been something of a thin line in recognising this, same as there is between madness and genius. Aristotle once quoted Plato: “no excellent mind is without a tinge of madness” and they knew what they were talking about. It’s not that long since scientists isolated a particular gene – known as DARPP-32 – which enhances the brain’s ability to think, and at the same time contributes to schizophrenia, the most common form of clinical madness.

Charles Bukowski, voice of the mad man, wrote a poem with the lines: “Some people never go crazy. What truly horrible lives they must lead.” And maybe now the same thing can be said about running. Or to paraphrase Frederick Nietzsche, madness is rare in individuals, but in runners it is the rule.

For years some doctors also questioned the sense of it all, especially the damage it might be doing to the hips and knees and possibly even the heart: our dad meanwhile is still running, even if it’s just a gentle shuffle down to garden to check on his tomatoes.

Now, the medical experts are falling over each other in the race to trumpet the benefits of running, and allow me to reference two: according to the Journal of Physiology, researchers at the University of Jyvaskyla in Finland have identified running as the most beneficial exercise to augment adult neurogenesis, the creation of new brain cells in an already mature brain; and according to the biomedical journal Cell Metabolism, running has been shown to prevent and cure five forms of cancer in tumour-bearing mice.

And of course instead of damaging the knees and hips and possibly even the heart, running has since been proven to do the exact opposite. As long as it’s done correctly. It’s hard for me sometimes not to shout out my car window when seeing people running past on their legs, rather than with them, or for not keeping their hips forward, as if in the moment of deepest sexual penetration.

“To be the best, one does not necessarily have to be mad, but definitely it helps,” declared Percy Cerutty, trainer of several Australian Olympic medal winners, including 1960 1,500m champion Herb Elliott, and who also championed the importance of proper running style – and indeed breathing.

The slow and the sudden growth of the mass participation events and especially the big city marathons have also helped turn running into a sort of morphine for the masses, mentally and physically. I know a lot of people are hoping the Dublin Marathon can still go ahead in some shape or form this October, even if it has to be a virtual one, if only because their minds are already so dependent on it.

There have been times in my own life when running has helped me from losing my mind, especially the dawn runs during a year-long retreat to Luggala, all 6,000 acres of it, back in 2013. When people still ask about surviving in that old cut-stone trapper’s cottage – and Luggala can by turns of the hour or light be touchingly calm or tortuously bleak – those dawn runs invariably spring to mind. No traffic, no noise, no people, no nothing – often barefoot, sometimes bare naked, tripping on my own endorphins before enjoying nature’s drunken high for the rest of the day.

Anyway, if there is one thing we have learned since the country went into lockdown nine weeks ago, it’s that running is now the people’s game. It didn’t need to be a marathon around their front patio, or a naked run around their back garden, as long as they got moving somewhere safely within their now 5km radius. It may now be necessary too for the big cities of the world to lay down designated running lanes to go alongside the bikes and the buses, or at least take the opportunity to consider it all part of the new normal.

The decision this week to allow Athletics Ireland to reopen their running facilities, one of the first sporting activities to receive Sport Ireland and Government endorsement as part of phase one of the roadmap in reopening from Covid-19, is one recognition of that.

As long as social distancing can be maintained, it was agreed that “athletics is a key strategic sport in improving the health of the nation, and the recent study detailing the huge increases in people walking and running in the last two months illustrates the necessity to open our club outdoor facilities.”

This was also recognition of something else, a case perhaps of putting mind over madness. Because maybe now more people will realise they go running not only for the exercise, the simple act of putting one foot in front of the other in quick succession, but to stop themselves from going properly insane.

Long may that continue to run.

Delta Work aiming to extend O’Leary’s success in Down Royal festival feature 16:20
Ole Gunnar Solskjær takes pop at pundits over Donny van de Beek comments 16:16
Bernard Le Roux cleared to face Ireland on Saturday after disciplinary hearing 15:55
Johnny Sexton: ‘We just know we have to be a lot better in all areas on Saturday’ 15:43
Harrington keen on breaking her Breeders’ Cup duck at Keeneland 15:16
Here is your handy guide to sport on television this week