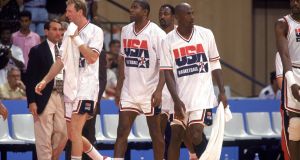 Larry Bird, Magic Johnson, Michael Jordan and Karl Malone (behind) walk on to court at the 1992 Barcelona Olympics for the USA’s game against Angola. Photograph: Mike Powell/Getty Images

The most riveting scene in all 10 episodes of The Last Dance, the Netflix-ESPN deep-dive into the mythology of Michael Jordan, takes place off-stage. It’s late in episode nine and easily missed: just a five second reunion with his old nemesis Larry Bird. But it speaks volumes.

The Chicago Bulls have just defeated the Indiana Pacers in a gruelling 4-3 playoff series. The archive film crew captures Jordan leaving the dressingroom looking a million dollars even in a banana-shaded power suit.

He has just been larking around with Gus, the older security guard whom Jordan has befriended and treats with the unabashed affection and respect he can never show his team-mates.

His first act after the final whistle was to grab the game ball and present it to Gus, who is by now ill and no longer working for the Bulls. “We got to bring in the ace in the hole to win this game,” he says. “That’s why we struggled – we ain’t seen you around. We gotta bring you out to Utah.”

When Jordan was merely a brilliant basketball player in North Carolina, Bird hovered over all of basketball like a day-star

The older man sits basking in Jordan’s delight at just seeing him there – the old familiarity. They are in this small plain brick room where the security team hang out: it’s where Jordan seemed to spend much of his time before games, too.

Seconds later, he slips through a curtain into a corridor. If what happens on NBA basketball courts is a kind of fabulous theatrical production, then here is the reality: the long, brightly lit corridor, probably close to midnight, a plane journey awaiting the losing team. He sees Bird and the pair immediately shake hands and embrace. “Enjoy yourself, dawg,” Jordan says, presumably meaning the holiday season.

Bird is grinning and then Jordan says: “Bitch, f**k you, y’all gave us a run for our money” and Bird mumbles something incomprehensible, then says: “Yeah, I’ll see ya” and turns and strides down the long corridor. What makes the moment stand out is that Jordan stands and watches him leave.

Then he calls after him that now he can work on his golf game. It’s kind of a taunt and kind of a salute. Bird half turns to acknowledge he has heard it but doesn’t bother replying. It’s like Alan Ladd moving on at the end of Shane. Then he is gone and when Jordan stands there laughing at Bird’s disappearing frame, we hear, for the only time in the entire series of which he is the star, the authority and the de facto producer, a note of doubt and uncertainty in his voice.

The Last Dance aired at a serendipitous time: all sport ground to an unnatural halt and most of the world locked indoors. It’s a farcical situation and kind of reflected the sense of watch-me charisma which Jordan generated in his wolf years.

And even though they played together for nine years, Jordan’s playoff experience against Bird was limited to two years

The responses to the documentary have been wildly diverse – Jordan’s team-mate Scottie Pippen is reportedly livid, Horace Grant has dismissed the narrative as ‘90 per cent BS’. Some regard it as a storytelling masterpiece, others as a puff piece. All perspectives have some validity to them . . . it’s certainly possible to argue all points.

But the true gems within the show lie not in Jordan’s endless lectures and yarns about his peerless competitive spirit blah-de-blah, nor in the old footage of those wonderfully edgy 1990s games. No, the best stuff is in the small moments when Jordan forgets the cameras are there and is unguarded – rather than un-guardable.

The documentary goes nowhere close to explaining just how gargantuan a presence Bird has always been for Jordan but it is clear in that exchange. Bird is 63 years old now and Jordan is 57. But when they met in the hallway that evening, Bird was just six years retired as a player. When Jordan was merely a brilliant basketball player in North Carolina, Bird hovered over all of basketball like a day-star.

The NBA was re-imagined through the transference of the Bird-Magic Johnson college rivalry into a perfectly balanced cross-continental rivalry featuring Bird’s Boston Celtics and Johnson’s Los Angeles Lakers. The personality of both figures mirrored perfectly the soul and identity of both cities.

For three years after Jordan was drafted by the Chicago Bulls, he had to be content with a role as the NBA’s exciting and beautiful adornment: the business of winning belonged elsewhere. When Bird and those Celtics were at their peak, Jordan was watching on like everyone else.

The Last Dance is in many ways a story about fathers. Jordan’s father, shot dead in a senseless robbery in 1993, lights up every frame in which he appears. But the lives of Pippen and Steve Kerr were also shaped by what happened to their fathers. It’s not surprising to learn that they never spoke about that.

Larry Bird grew up in the heart of basketball country: the flat lands of Indiana. His mother Georgia worked at Flick’s restaurant. His father Claude fought in the Korean War and was apparently close with his six children but struggled. His death, by self-inflicted shotgun wound in 1975, came just before Bird burst onto the public consciousness as a basketball phenomenon. He has spoken sparingly about this because Bird speaks sparingly about everything: he dispenses words like a prudent bank teller.

Bird’s time span as the dominant figure in NBA was relatively brief: he came into the league in 1979 and won his three championships in 1981, 1984 and 1986. After that the Celtics began to age and Bird was compromised by severe back troubles that required him to lie on the floor beside the bench during the last years of his career.

Jordan’s 63-point game in the Boston Garden in the winter of 1984 has been anointed as a sacred moment in the mythology. And in the Last Dance, Bird makes an appearance to say a few nice things about it – while stressing, at least three times, that Boston won the game (n’all). He doesn’t say what is almost certainly true: that he never thought much about Jordan because he didn’t see Chicago as a threat.

And even though they played together for nine years, Jordan’s playoff experience against Bird was limited to two years, 1986 and 1987. Boston won both series 3-0. They were dismissals rather than contests. That he never got the pleasure of seeing Bird defeated is an itch that Jordan will never get to scratch and there’s a good chance that it is one of the many aggravations and slights that continues to motivate him and drive him mad.

The main flaws levelled against The Last Dance is that it magnifies Jordan’s persona to a cartoon-ish degree and consequently marginalises too many compelling figures such as Phil Jackson and Rodman and Bill Laimbeer, the hyper-intelligent late 80s bully who went on to champion the women’s NBA. But that’s all fine.

It’s not what Jordan says that matters and it’s one of those shows that will deepen and give you more upon repeat viewings. You can bet that the man himself will give it a few airings, late at night, with the whiskey and cigar and oh to hear what he says whenever he sees that few second clip with Bird. What you’re seeing there is Jordan’s respect for a basketball player whose approval he sought even then.

As for Bird himself, there’s a good chance that he simply couldn’t be bothered sitting down to watch 10 hours of old basketball stuff. There’s a better chance he doesn’t have Netflix. He’s the true shark in The Last Dance.