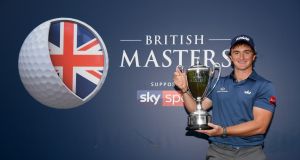 The European Tour is set to restart its season at the British Masters on July 23rd, followed by four more events in England and Wales, according to a report in the Daily Telegraph.

The British Masters had been flagged as a potential retstart date for the tour which has seen 21 tournaments – including the Irish Open which was due to take place next week – either suspended or postponed, but a five-week stretch in the UK is something that would not usually occur.

Due to quarantine measures currently in place around Europe it will be easier for the tour to play stretches in the same country and the Telegraph reports that, after the British Masters at Close House, the circuit will move to the Forest of Arden near Birmingham, then on to Hanbury Manor in Hertfordshire before two consecutive tournaments at Celtic Manor in Wales.

The five-week stretch will all take place behind closed doors and is deliberately at courses with hotels on site meaning players can effectively be quarantined at the course.

While the British Masters was always on the schedule – and is only being moved forward a week – the other four tournaments have been specially added and will each carry a purse of €1 million.

The news will come as a relief to players like Tommy Fleetwood who has said that he will not be playing on the PGA Tour when it swings back into action next month because he does not want to face two weeks of quarantine upon landing in the US and a further two weeks when he returns back to the UK.