The purest thrill of athletics that’s gone from the summer 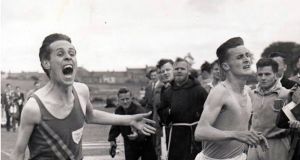 The plan was to sit back until the last 300m and then kick blindly to the line. There was no sure or best way of winning, only the dream way, and when you’re 17 and utterly absorbed by running that’s sometimes as good as it gets.

As it turned out the race was already decided. One, two, and then three. Turning back the clock on the last lap wouldn’t matter anyhow, because events in Belfield on that early summer afternoon changed things in ways which over 30 years later still ring positively true.

Every athlete can trace the trial back to a day of lasting impact and influence, and I know this one is shared among a great many and for the longest time. Since 1916, to be exact, when on the night of Monday, April 3rd in Wynne’s Hotel in Dublin inspired men like HM Finlay agreed to stage the first Irish Schools Athletics Championships.

Finlay was then honorary secretary of the old Irish Amateur Athletic Association (IAAA), and recognised the need to inspire a new generation of athletes, in part because of the fall off in affiliated clubs after so many young Irish men went off to fight in World War I. His motion was passed, unanimously, the inaugural event set for Saturday May 20th, at Lansdowne Road.

Then that other big 1916 event happened, so the Schools Championships were postponed, “due to the rebellion”, until the September 23rd (with the allowance that schoolboys from the previous term could still compete). They’ve been running every year since, despite some interruption during World War II when staged only at provincial level, and expanded and inspired in ways unimaginable.

Such was the immediate success they were moved to Croke Park, in 1922, and six years later Denis John Cussen, a schoolboy sprint champion from Blackrock College, ran the 200m for new Free Irish State at the 1928 Olympics in Amsterdam. Imagine that.

It wasn’t long until one of these schools champions went on to win the Olympics: not Joe Delany, who won the senior boys 400m in 1950, but his younger brother Ronnie, who won the senior boys 800m in 1952, representing CUS in Dublin, and again in 1953 - before just three years later winning the Olympic 1,500m gold medal in Melbourne. Around the same time Terry, Pat and Hugh O’Callaghan from High School Clonmel, sons of Ireland’s only double Olympic champion Dr Pat O’Callaghan, were also crowned Irish schoolboy champions.

By then, just qualifying for the Schools Championships was an achievement in itself: with regional and then four provincial championships, where only the top three in each event progress to the national stage, it’s a process sometimes equalled in ruthlessness by only the US Olympic Trials. In June of 1956, my dad was sitting his Leaving Cert at Tralee CBS and hungry to make a name for himself, only for a bout of the mumps to cast doubt over his chances of winning the senior boys mile, the blue ribbon event.

He only managed third in North Munster, was beaten again in the Munster finals, and wasn’t sure he’d even make the 100-mile trip to Duggan Park in Ballinsloe until his uncle Danny Shanahan offered to drive. That race was set to be decided between Mick Connolly of Synge Street and Dan Carbery of Castleknock College, before both miscalculated the thrilling kick from the 17-year old from Ardfert, who took the win in 4:35.1, a championship best performance.

That victory also earned him a running scholarship to Idaho State University, his father Jack selling two prized cattle to pay for the airfare, and he went on to run in the Olympics too. As have 77 Irish Schools champions in all, more than any other Olympic sport. Imagine that.

Many others went on to bigger things - not just in track and field. In 1962, a sprightly young Ruairi Quinn from Blackrock College won the intermediate boys 800m, in 2:04.9, and later served as Government Minister for Finance. Others went on to find fame in different sports: like Pat Hartigan, who won the senior boys shot put for Limerick CBS, in 1968, then in 1973 won an All-Ireland hurling title with Limerick.

There’s also an all star list of Irish rugby internationals that started out by winning Irish Schools Athletics titles - including Victor Costello (his senior boys shot put record of 17.93m, from 1990, still stands) and Cian Healy (twice senior boys shot put champion, 2005-06). It wasn’t until 1970 before any girls events were added, and Sonia O’Sullivan, Catherina McKiernan and Derval O’Rourke later broke through with a series of titles of their own - again inspiring themselves, and others, to far bigger things.

Almost without exception, every one of Ireland’s World, European or Olympic medal winners also won an Irish Schools title - and some of their records still stand, such as the 14:17.0 which John Treacy from St Anne’s Cappoquin ran to win the senior boys 5,000m in 1974.

In June of 1989, Niall Bruton from St Aidan’s CBS was the class act of the senior boys 1,500m and proved it long before the finish line, and countless times after, running in the 1996 Olympics in Atlanta and also clocking 3:35.67. Frank Hanley from Limerick was second and after that last 300m kick got me into third, all three of us ended up in college in America, and can trace a lasting bond to that early summer afternoon in Belfield.

That bond also goes far beyond medals or scholarships - to the over 30,000 athletes who now share in the Irish Schools Athletics Championships each year, including the Irish Schools Cross-Country. The overall entry in the track and field last year was 18,005, with 12,308 in cross-country, coming from 671 affiliated schools, just under three-quarters of all secondary and post-primary schools across the 32 counties. Imagine that.

It’s also 50-50 boys and girls, across four age groups and entirely inclusive, and the early summer showdown that is the track and field finals features just over 1,000 of the finest student-athletes, from 360 schools, across 122 events, some also going on to win their first international vest at the Schools International against England, Scotland and Wales.

Lots of schools sports have been taken out by Covid-19, and last Monday the Irish Schools Athletics Association announced the cancellation of all regional and provincial events, up to and including the championship finals in Tullamore. Some may get their chance again next year, for others that once in a lifetime and still purest thrill of athletics is now gone for the summer.