Philip Browne: Sport could take a generation to get back on its feet 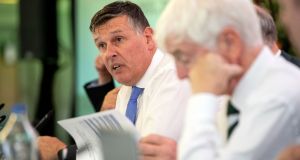 IRFU chief executive Philip Browne has warned of the dire consequences if there is no return to play before the end of the year. Photograph: Morgan Treacy/Inpho

The IRFU chief executive Philip Browne has warned of the dire consequences for Irish rugby if there is no return to play before the end of the calendar year, due to the additional losses of €15-20 million were Ireland’s postponed 2020 Six Nations games against Italy and France, and the November international series not played.

Browne has also appealed for Government assistance after the financial difficulties which the Union has experienced since rugby effectively went into lockdown on March 13th.

With the Italian Federation joining the Irish, Welsh and Scottish Unions as the main shareholders of the competition, as part of “a new joint venture partnership”, Browne revealed that “the IRFU is phasing its sale of equity to CVC with payments being received over the next three seasons. The total value to Irish rugby is in the order of £30 million (net of costs, which equates to €33.56 million) with an initial sum expected today of approximately £5 million (€5.59 million).

“While hugely welcome, and an enormous vote of confidence in rugby, the investment must be viewed in the context of the mammoth financial issues the IRFU is facing where revenue losses in the order of €15-€20 million will be encountered should the 2019 Six Nations not be completed and the Guinness Autumn series cancelled.

“All this,” he added, “is against a background where the IRFU’s cash reserves are likely to be exhausted within a matter of months.”

The Union, he said, had “hit a revenue cliff”, adding: “The only revenues that will be generated are revenues generated by professional rugby in terms of competitive matches.

“So what we have to do is we have to get back playing competitive, revenue-generating matches as soon as we possibly can and I suppose there are variations there. There is playing behind closed doors and then there’s playing with full attendance and everything that lies between the two ends at that particular spectrum.

“What we’ve said is that in terms of we lose the tail-end of the 2020 Six Nations and we lose the autumn internationals, and we can’t play those, that’s going to cost us €15 to €20 million. If we play behind closed doors and we can still play those matches, and finish off the season and have the autumn internationals, that will cost us €10 to €15 million. So even if we play behind closed doors it doesn’t resolve the financial difficulty that we’re going to be facing into.

“If we lose the Six Nations in 2021 you’re talking about a €30 million loss. If we have to play behind closed doors in the 2021 Six Nations we’d be losing in and around €16 million in terms of gross revenues.”

The IRFU have submitted their return to train and play protocols to the Government with a view to holding interprovincial derbies on the weekend of August 22nd/23rd as a means of restarting both rugby in Ireland and the Pro 14.

“In these times these matches are not just rugby fixtures, they are a beacon of hope for the entire country,” said Browne. “A step, albeit a small one, in Ireland’s opening up to an environment for which the entire country yearns, deserves and has sacrificed so much to win back. We very much look forward to being able to play our part in delivering this much needed tonic for the country.”

Browne expressed confidence that despite operating under different Government guidelines and currently being in furlough, Ulster will be able to follow the same protocols and partake in these proposed interpros.

That said, the IRFU chief executive conceded: “There’s huge challenges and nobody is underestimating those challenges. But I think what’s important is that we actually put a target down. I think the difficulty that we’ve had over the last couple of months is just a set of moving targets. It’s almost impossible to plan for anything, when the targets keep on moving.

“That obviously is going to require us working with the health authorities and I’m working within the guidance that’s given by the Department of Health. But at least if we have a target, or a stake set in the ground, we can try and work towards it. Otherwise, we’re simply going to be chasing shadows.

“If it happens, that’s fantastic. If it doesn’t happen well, then we need to understand why it can’t happen and then set another target.”

For these games to come to pass, Browne estimated that the provincial squads would need to be back in full training at least six weeks beforehand, ie from Monday, July 13th.

The target is to play two rounds of derbies behind closed doors which would lead into playoffs, with EPCR also seeking to run off its knock-outs stages as a prelude to Test matches toward the end of October and November.

“Specifically, what this will look like, it is too early to say,” said Browne. In the event of Ireland’s scheduled November games against world champions South African, Australia and Japan not going ahead due to ongoing travel restrictions between continents, it is understood that the European Tier 1 unions and federations are looking at, or variations of a Six Nations.

In any case, Browne concluded: “If I might just finish on a stark note in relation to sport in general, the levels of financial loss being encountered by all sporting organisations is catastrophic and rugby is no exception.

“Almost 70 clubs have already applied for support through the Club Continuity Support Fund and this will only grow. The IRFU will do what it can to lend support to clubs but there is only so far drastically depleted funds can stretch.

“It is not sensationalist to suggest that without Government financial support sport will take a generation to get back on its feet, leaving an enormous void at the heart of communities throughout the land.

“Sport and clubs have played an inestimable but often undervalued role in the development of our young and the health of the general population.

“I would call on Government, who have done such a magnificent job in shepherding the country from the worst excesses of this pandemic over the past months, to fully recognise sport’s contribution and role as a core strand in the fabric of our society, and in turn provide the significant financial support all sports will need in the difficult transition from dormant isolation to vibrancy across their communities.”