Andrew Porter diary: New house is sparse but I have my gym equipment 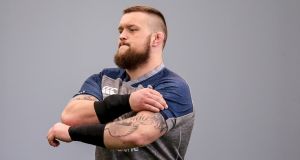 Andrew Porter is keeping himself fit and healthy ahead of a return to rugby. Photo: Mathew Johnson/Inpho

I thought March was one of the longest months of my life and yet the last 10 weeks have flown. At least things have started to ease this week and hopefully over the next few weeks more places will begin to open up. It will be nice to get back in with Leinster and see all those faces you were used to seeing every day, train with your best friends and rediscover the rhythm and flow of life as a professional rugby player again.

You forget what day it is really, because every day feels like Groundhog Day, but suddenly we’re nearing the end of May. The weather has lifted people’s spirits. It’s nice to be able to go for a walk and feel like you’re not in Ireland for once.

When I bought my first house in early February I’d imagined having barbecues in the back garden by now. But then everything started shutting down and I couldn’t get anyone in to do anything. I still have to put down the floors.

As it turned out though, I’ve had the best of both worlds.

I’ve still been living with my dad, Ernie, and older sisters Leigh and Erica, in the family home in Cabinteely during the lockdown. My dad played as an inside centre for Old Wesley and I’ve been told countless times he was a prop in the backline.

But my new house is exactly 2km away, (honestly, it is!) and this has been very handy, because all I have in there is my gym equipment; my squat rack and my bars and my plates. This probably says a lot about me, that my first bit of furniture, before chairs, beds, tables or anything is a squat rack.

It’s not that I was particularly well prepared. I was training with the Irish squad when we were told that the French game was called off and then it all happened very abruptly. Three days later the Guinness Pro14 was postponed and Leinster’s trip to South Africa was called off.

When the lockdown orders were announced I was at home in Cabinteely and then had to rush around and scramble as much gym equipment as I could, because all the gyms were closing down.

My sister Leigh is a personal trainer and is also a powerlifter, and one of her friends helped us out with a few plates. Luckily too I have a good relationship with the owner of Southside Gym up in Sandyford, Barry Sheahan, who also gave me some stuff, and I bought my squat rack off Phillip in McSport. I’ve everything I need. In fact, maybe more than I need.

Whenever I do move in to the new house I might get a few guys in to help pay the mortgage off, especially with everything up in the air. But I’ll have to get the floors down first, and buy in more furniture than just a squat rack, before I ask people to move in.

But it’s certainly served its purpose over the last 10 weeks. It’s my gym that’s keeping me sane at the moment. If I’m bored I’ll go up there and obviously I have my structured training plans that Leinster give us as well, in terms of our running. But even to have my own gym in the back garden when all this is over, I’ll be happy out.

Leigh will come up there with me to work out. She has just finished her second year physiotherapy exams so I have my own personal physio as well.

I can’t be divulging my best scores or anything like that and while I’m allegedly one of the strongest on the team I don’t really compare myself to anyone else. I’m just going to try to keep getting better for myself, to keep my body in the best nick I can for whenever we do come back to play rugby. That’s the main thing.

With the time we have on our hands lately, I’ve been able to do more ability and rehab work, and keep myself fit and healthy. That has been one of the up sides to this time, being able to put more attention to detail. Normally we’d have a small window to work on injury prevention, like maybe a few twinges, but not like we have now. My shoulder was at me a little, but for the last 10 weeks I was able to work away on it.

It’s keeping myself strong, mobile and healthy as well. For me, weightlifting and gym work is as much a mental benefit as it is a physical one. For a lot of people, especially now, training is an outlet, and I’ve always found it a stress reliever.

If I couldn’t do it for a few days, for whatever reason, my fingers would be itching. I wouldn’t know what to do with myself. I guess I’m addicted, but this is probably not a secret to anyone who knows me.

I’d do some weightlifting four or five days a week. It’s not completely overloading. I wouldn’t be going straight into my maximum effort. A lot of the time I’d be going up to my new house and my new gym just to do some stretching. It’s almost like filling a gap in the day and it’s a good way to spend your time.

Trying to maintain the skills is the hard part when you’re not meeting up with the other players. But even my sisters’ hands are getting a bit better, being able to practice with them, and I’ve got the old man back throwing around the ball every now and again. He hasn’t lost the old skills, although I’d say he’s passed more in the last 10 weeks than he ever did before.