Sonia O’Sullivan: Learning to ride an elliptical bike as I recover from injury 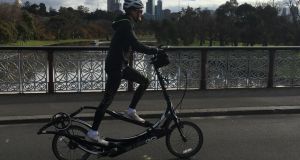 The Elliptigo is a lot of fun, one more activity to include in my week

First of all a confession: it’s been over seven weeks now since my last run. That’s over 50 days, which in a runner’s life is very long time. It’s definitely a long time when you’re looking ahead, and looking back I can hardly believe it’s actually been that long.

The good news is if time flies like that then I must be having fun. Or at least doing something to distract me from not running.

It was such a happy time for me in late spring, ticking off my 100th parkrun in Dublin, and sharing this with so many other people who enjoy the simple and lasting benefits of running, both mentally and physically.

Only after a whirlwind of runs around Ireland, there was a pain in my left foot and I knew something wasn’t right, and I’d need to get it checked out when back in Australia. Sometimes you can plough on for a long time with a nagging injury, but eventually you have to face the reality and take some time out.

A sore foot from the outside is one thing: it’s another thing when you look deep inside with an MRI. After years of wear and tear, there were a few underlying issues that needed some attention. If I was training for the Olympics then I’d be put in a boot to completely immobilise my foot and speed up the healing process.

Instead I was prescribed no weight-bearing activity for a good six weeks. I am starting to see the light at end of the tunnel now, and my only aspiration is to get back to parkrun fitness levels. In other words just getting around a 5km on a Saturday morning, and maybe a few more runs during the week if possible.

With no walking allowed, the first thing I had to work out was a walking plan for the dog.

I soon realised how much fun it is to ride my bike with Snowy, our eight-year-old border collie, running alongside. He always looks so happy, and it reminds me how good it is to just get out and run, to blow away the cobwebs in the cool, crisp mornings, racing between parks, trying to avoid the early morning commuters on the bike path.

There is also the road bike, but I find it hard to do that every day. By the time you get all the gear on and head off into the country you might not be back until the afternoon. Being away from running you also miss out on the social aspect as much as everything else. The morning run is always the perfect catch-up chat with a friend.

I had done a little bit of Pilates before, and figured I would sign up twice a week to a new class. The Swedish Pilates studio is conveniently just across the road. Pilates is one of those activities where you’re not so sure of the exact benefits while lying on the Pilates bench in a nice warm room for 45 minutes or so, focussing on core stability, a bit of arm and leg strength also.

After a few sessions you really do feel a difference. On the bike, for example, you just feel a bit more power coming from the core, and also feel more efficient climbing hills while still seated, it just feels that there is less effort than before.

There was also a bit of home gym, sit-ups and push-ups and throwing around the 5kg dumb-bells. Then one day a week a short walk to the playground with Snowy, some TRX (total resistance exercises for me), with a hurl and sliotar to keep Snowy entertained while I’m exercising. That was four days assigned with some activity.

It’s a bit cold for swimming in Melbourne this weather, and I began to wonder maybe there is something else I could do. I remembered seeing pictures of some athletes using stand-up bikes while injured, known as elliptical bikes, and that got me wondering: maybe these would be more like running and a bit warmer for the fingers and toes than the racing bike?

I made a few enquiries through the Melbourne Track Club, as they often use them on their training camps in America. I was put in touch with Monika, based in Melbourne, known for riding her outdoor Elliptigo bike most days for at least an hour. I figured it was worth a try, something new and different to satisfy the lack of running in my life. We met in a car park overlooking the beach, and it felt like learning to drive all over again. By all accounts if I could ride a bike I should be okay.

Essentially you’re standing up on the bike, holding on to very high handlebars, your feet pressing down on flat pedals to create the forward motion. It’s sometimes advertised for those who can’t decide between running and cycling, and at first feels like you’re standing up and learning to run and cycle all over again.

After a few laps of the car park, I was deemed safe to head out along the bike paths alongside the beach and heading towards the city. This was just a trial, but it was enough to get me back again for a proper hour ride.

On day two, I came back with my GPS watch and heart-rate strap. This would really give me an idea if the Elliptigo bike was more than just a new toy with a short life span. This time we went all the way to Port Melbourne, where some of the same cruise ships that visit Cobh over the summer also stop off in Melbourne.

After 25km, with an average speed of 20km/h and maximum speed of 30km/h, my heart-rate was definitely more in the range I normally see while out for a run. As I rode along with Monika, there were times you could go side by side and have a chat, then take turns to push the pace and really get the heart pumping. The inclines are harder than running but coming downhill is a nice cruising rest, where you can take time to look around and see things from a few feet higher off the ground.

The Elliptigo is a lot of fun, one more activity to include in my week. I can already visualise myself along the Clontarf seafront during a break in the European Athletics Championships coverage on RTÉ in August. I just need to find Ireland’s Monika to show me the way.

The Offload: Philip Browne’s grave outlook should be taken seriously 10:00
All in the Game: Did Rory Delap’s long throws cause the 2008 financial crash? 10:00
Cricket ban on using saliva to shine ball will only be temporary 08:41
UK government says elite athletes must be allowed to opt out of contact training 08:14
Resisting the pull of The Field, Tiger Woods proves fitness in Covid-19 charity match 07:55