Frazer is recovering from a knee ligament injury 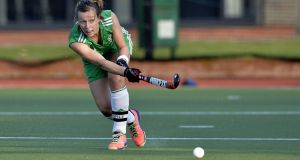 Ireland coach Graham Shaw is confident that Megan Frazer will be fit for the World Cup. Photograph: Inpho

Graham Shaw has given Megan Frazer every chance to prove her fitness in time for July’s World Cup as he named the Derry woman in his squad of 18 for the event.

Frazer has played just a handful of games in the past 20 months since suffering a cruciate knee ligament injury in 2016, undergoing three surgeries, the latest of which came just a few weeks ago.

But her prodigious ability - allied to a change in competition rules - has seen the coach take a punt that she can be in full-flow for London come July 21st.

“She’s a serious talent,” Shaw told the Irish Times. “One that we haven’t seen around Irish hockey much for the last number of years so we have to give her every possible chance she can impact our team.

Taking such a chance has been aided by a tweak of the World Cup rules. Previously, nations could only work off an 18-player panel with no replacements. This time, however, medically approved subs can be brought in during the competition, something that played into Shaw’s thinking.

“You take a risk with players coming back from injury; that’s natural. We feel they will get through the next few weeks. The format does give you that bit of a comfort blanket if players do have a recurrence that you can bring in players that have been part of the squad.”

Other than that, the squad is largely as expected, a hugely experienced line-up with only Roisin Upton holding less than 50 Irish caps while all have played international ranking events in the past.

It means no place for former 19-year-old Sarah Torrans, the former Irish underage international sprinter who made a late push for inclusion. She is one of four on the replacements list along with Sinead Loughran, Naomi Carroll and Emily Beatty.

Nicci Daly is another on the comeback trail from injury. A stress fracture in her foot saw her miss last weekend’s upbeat trip to Germany but she will return for next week’s practice series against Japan in Cork.

After that, there are games against Chile, Italy and South Africa before the big date in the group stages against USA on July 21.