Sonia O'Sullivan: Ireland will get warm welcome in Australia 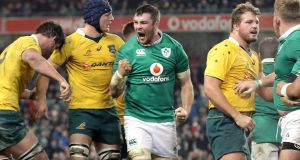 It feels like I’m slowing, falling into a state of hibernation. It’s what happens in Australia during the winter months when all sporting events of interest feel like they’re happening on the other side of the world. Right now most of what matters tends to take place while I’m sleeping, being nine hours ahead, or nine hours behind, depending on where you’re coming from.

One of the things I like to record and then watch later without knowing the results is the Diamond League athletic events. You can quickly fly through each race – or fast forward – even though sometimes it’s nice to sit back and listen to the full commentary.

I had been following the Giro d’Italia too, only it’s not easy to find time to sit through a few hours of a stage after it has all ended. Especially when you know already that Sam Bennett has won yet another stage. So the highlights are suffice to give a general idea of what’s going on.

It also took the friendly lead-up game between the Republic of Ireland and France this week to remind me that the World Cup in football is taking place in Russia, starting in just two weeks’ time. Australia have qualified for the fourth successive time, although you mightn’t realise that unless you went looking for it.

I expected there would be a bit more build-up and interest generated already. But it’s not so obvious at all, particularly when I am accustomed to the build-up and excitement whenever the Republic of Ireland have qualified in previous years. Maybe that will change if Australia start winning some matches. It won’t be easy.

It’s interesting too that the first game for Australia will be against France, and it is set to take place at exactly the same time that the Ireland rugby team take on Australia in Melbourne in the upcoming Australia tour.

That should certainly test the ratings, and give a good idea where “soccer” – as they firmly call it here – and rugby lie in the wake of the dominant Australian Rules Football, which gets blanket media coverage throughout the winter.

I like to follow the Melbourne club Richmond Tigers even if just picking up team alerts on my phone wherever I am in the world – team sheets, quarterly updates throughout the game.

Maybe now that France have shown some form beating Ireland comfortably 2-0, and with the Australians now gathered in Turkey for their pre-tournament training camp, there will be some momentum building towards the opening games in Russia in two weeks’ time.

It’s a daunting enough task for Australia playing France, one of the higher ranked teams, so early in the tournament. Then their second pool game is against Denmark, the team that defeated Ireland in the play-off games last year. Either way, it should bring some interest to this side of the world, closely followed by the arrival of the Irish rugby team in Melbourne.

This is also looking a little daunting for Australia. With the Australians trying to regain some form, and confidence, and Ireland regrouping again after their most successful season, it’s going to be a tense time over the three games.

All three games are set to be sell-outs – Brisbane, Melbourne and then Sydney. I suspect there will be more support for Ireland in the stadiums. There are so many Irish people living in Australia now, and we all know how well the Irish like to support their own. Especially while away from home. For those of us living in Melbourne, the match will be one of the highlights this winter.

I’ve already been to a couple of Ireland versus Australia games. I was in the wind and lashing rain at the old Lansdowne Road stadium in 2006 when Ireland had one of those rare wins over the Wallabies. I was at the World Cup game in Eden Park, New Zealand, in 2011 – again Ireland took the win. At the time it was a shock defeat for Australia, who still went a step more than Ireland to get to the semi-finals only to be defeated by eventual winners New Zealand. There is history between the teams.

Ireland are now second in the rugby world rankings, and it is something new for Australia to face Ireland as underdogs. Australia are not the powerhouse they have been in the past.

Down through the years I’ve crossed paths with the Irish rugby team, and the energy and atmosphere is always something to look forward to. Just before the last World Cup in England, I was invited along with a few more former Irish sports stars to join the Irish team for dinner ahead of their game against Italy. We sat at different tables for each course, and got to chat and share stories in a very casual setting.

Alongside me were Barry McGuigan, Niall Quinn, AP McCoy and Henry Shefflin. After the dinner we were each presented with a signed jersey. It was a fitness test to see who would be brave enough to squeeze into the figure-hugging jerseys.

Up until recently this jersey was packed away in a safe place. Then I thought maybe I should do something with it. I’m often asked for something signed, though rarely hear back about what happened at the auction or where the jersey ended up.

I reckoned the Irish jersey might raise a few dollars. We framed it, and put it up for auction on the night, and I was pleasantly surprised the next day when I got a message to say the jersey sold for $10,000 (€6,400). This really got the ball rolling for our run this year.

I sent a message to Joe Schmidt to let him know how grateful we were for this added bonus to our funds – and wished the Irish team good luck.

Maybe, like me, they hear no more once a jersey is donated.