Sonia O’Sullivan: Melbourne is a home from home for Ireland

Judging by Sexton’s demeanour, team not here for the koalas or the kangaroos 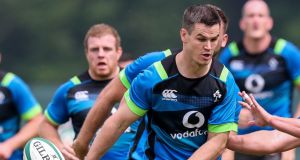 So often the weather can affect your mood and how you start your day. Some days are not so good, some days are better.

Tuesday was one of those days. At first it didn’t look so good, not the best Melbourne winter day, only once you lace up your shoes and get outside it can feel a lot better. Even with heavy rain clouds looming all around.

Ireland should certainly be better this Saturday. When you travel 10,000 miles across the world, no matter how hard you try to combat the jetlag and other side effects, it always takes one hard blow-out to regain your sharpness, to find that edge you need to be at your best. Nothing you do in training will prepare you for the true test of competition – and I’ve made that trip enough times to know.

Even if Tuesday wasn’t the most inviting day to saddle up and cycle into the city, I had the extra motivation of calling in on the Irish team, to get a close-up view of the mood in the camp.

For the many Irish people in Melbourne, there’s plenty of excitement about Saturday’s second test at AAMI Park, also known as The Melbourne Rectangular Stadium.

Purpose-built just eight years ago, AAMI Park is a rectangular stadium designed specifically to host rugby and soccer. Most pitches in Melbourne are oval in shape and the supporters are just too far away unless it’s an AFL game. It seats just over 30,000 and will be suitably intimate for Saturday night – or morning, if watching back home.

For much of this week the Irish team have been using a local Catholic Boys School, St Kevin’s College, as their training ground in Melbourne. Conveniently for me it’s just off to the left of the main bike path as I rode into the city. It was a good chance to catch a glimpse of the team training, and also see if there were any other interested spectators along the way.

As I stopped for a look, a few curious walkers stopped briefly to see what was going on, but continued on their way, none so curious as to enquire further.

It was just after 12pm, and there was due to be a press briefing back in the city at the team hotel at 1pm. A quick calculation and I knew there was plenty time to get into town and maybe even grab a coffee on the way.

While watching the game from Brisbane last weekend, I was also tuned in to RTÉ radio, Michael Corcoran and Donal Lenihan giving a more balanced commentary for the Irish listeners. I was in touch with Michael this week, who was giving me an update on the changing daily schedule.

It’s always interesting to see athletes at a press conference. Having sat on the other side of the table for many years, there’s a sense that you don’t want to give too much information away, don’t want the competition to know what you might be thinking. It’s best to just look forward positively, still hold your cards close to your chest.

With a team, there is a sharing of the load, and who gets to face the press and answer the questions. Last week it was all about the novelty of arriving in Australia, getting out in the sea on jet skis and going to see the koalas. By Tuesday it was clear that novelty has quickly worn off. Now it’s all business and focus on how to do things better.

I asked Johnny Sexton as he left the press room if there were any activities planned for the week. outside the training and recovery. And I quickly got the impression he wasn’t here to check out the koalas or the kangaroos.

Ireland came down to Australia the strongest team in Europe, expecting to continue their winning ways, only to get knocked back in the first Test.

Defence coach Andy Farrell gave an honest view ahead of the second Test: they just need to do things better, raise their game and play to their strengths. There are many reasons why Ireland may have been caught off guard, lost the momentum early on. Sometimes you get to the point where you just want to start all over again, and that’s the opportunity Ireland have on Saturday.

It’s more like Irish winter weather in Melbourne right now, and the stadium is more likely to be filled with green jerseys and a sprinkling of yellow. It’s low-key among the local press too, it’s starting to feel like Ireland are the local team.

Just after the press briefing, I was sitting in a local cafe before heading home on my bike, the Irish team walked past, heading to the gym after lunch. I gave them a quick wave, and they waved back, just like you’d do in your home town.