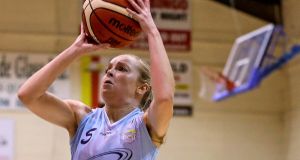 Four years ago it was a long shot to imagine Sarah Woods finishing this season as MVP in basketball’s Irish Cup final and Super League Player of the Year.

Not that she didn’t have the necessary skill or ambition, having been an Irish international since U16 and one of three teenagers called into the Irish senior squad for the 2009 European Championships.

But circumstances have mitigated against Woods thriving for as long as she has.

She joined a star-studded DCU Mercy side before she’d even won the last of her10 All-Ireland Schools’ titles with Holy Faith and was a wide-eyed 18 year-old when they won the 2007 Superleague final.

“I got exactly 17 seconds!” she laughs, remembering her awe for senior teammates such as Suzanne Maguire and Lindsay Peat. “I just thought ‘when I get on I’ll do my best’ and I did my best for those 17 seconds.”

Debts of €1.2 million saw Basketball Ireland withdraw completely from international competition in 2010 and a women’s side wasn’t entered again until 2016 when the players had to part-fund their European campaign.

With so many near misses at club level and no international action, Woods could easily have taken her diverse talents elsewhere.

All five of the kids in her sports-mad Clontarf family – including her twin Becky – were up for the pool at 5.30am each day and juggled swimming with tennis and gymnastics as well as athletics with Clonliffe Harriers.

Becky ran 1,500m, competed for Ireland at European cross-countries and has just recently switched to triathlon.

Sarah also ran cross-country, and 800m and 400m hurdles on the track. Her PB of 63:27 seconds dates to the 2012 Irish Senior T&F Championships where she won a bronze behind European finalist Jessie Barr. But eventually she concluded that juggling two sports was diminishing her potential in one, and her perseverance with basketball has paid off.

DCU bounced back with this year’s first cup victory in seven years, the blue riband of the domestic game.

So here she is, still a veritable fizzball of energy, just seven days short of her 30th birthday which coincides with Ireland hosting the European Championships for Small Nations in Cork next week.

“They say an 800m runner’s fitness is ideal for basketball and I’m very lucky to have always been injury-free which I put down to athletics,” Woods says.

“I was taught to run properly and I also know when my body needs a break. I was also lifting [weights] from the age of 18 so I have strong ankles and limbs and think that’s a factor.”

She also credits her longevity to DCU Mercy coach Mark Ingle who constantly preaches self-improvement in a club whose philosophy is “athlete first, winning second”.

She is not bitter about Ireland’s lamentable six-year exile from Europe, stressing it didn’t occur in her formative years.

“As a teenager I actually got to play with people like Susan Moran [ex-WNBA] and Suzanne Maguire on that great team in 2009 when we beat Slovenia and the Netherlands and only lost to Montenegro. There’s a group of us now in our late 20s and a gap then to the 22 year-olds. It’s the generation in-between that we lost.”

An international programme of sorts did continue during the hiatus, she stresses.

“We’d meet up for six-week stints and play countries like Luxembourg and Wales. We just didn’t have a solid two-year programme like we have again now.”

Woods is not only still starring on court but on the sidelines.

A chemical engineering graduate from UCD, she teaches maths full-time in Loreto St Stephen’s Green, an all-girls fee-paying Dublin school, and coached them to a surprise and historic All-Ireland Schools’ B Cup and League double this year, quite an achievement given that only four of them played club basketball.

“I had them in at Christmas and over Easter, [I] just said ‘lads, this is what it’s going to take!’ so it was brilliant to see their dedication pay off.”

She well knows how easily teenage girls can drift from sport, so all of her schools players get a little booklet she’s compiled which lists their local camps and all of Basketball Ireland’s clubs and contacts.

“That connection between school and clubs is crucial and we need to be more proactive in that.You need a mentor, someone who can advise on which club is better suited to their standards,” she says.

“I can’t wait for September to see how many of them have gone to clubs and camps,” she enthuses. “I’ve said ‘girls, we’re in the A division now and you have to keep improving’.

“Our principal Jackie Dempsey is really supportive. We had so many buses at the cup and when we couldn’t do it for the league finals because of the snow, the teachers put it on big screens around the school. Everyone was watching and you got First Years asking ‘how do I get involved in basketball?’”

Woods believes Basketball Ireland’s excellent social media, live game streaming and innovations such as the 3V3 tournament they recently ran in the middle of Dundrum Shopping Centre are also key to engaging not just teens but the wider public with her sport.

Ireland’s U18 girls played their way back to European A standard in Dublin last summer.

Two years ago Ireland narrowly lost the final of this third-tier European Championship to Malta and hope home support will help them go one better.

Woods’ 30th birthday will then be celebrated on a three-week holiday to New York, Las Vegas and Cancun.

McDonald’s brother lives in Brooklyn where, even while visiting on holidays, she can’t resist popping down to the local court for a pick-up game.

“It’s mad. Myself and Becky were playing last year and a guy on a bicycle with this massive boombox on his shoulder went ‘oooooh check out those white girls killin’ you guys!’

“We weren’t actually killing anyone and were like ‘eh, you DO know we have phones now that can play music?’ Everyone who passes street-ball games throws in a comment, it’s so much fun.”

Fun is as integral to Woods’ longevity as her dedication and leadership.

When she slags her teammates’ fake-tanning rituals, they throw shade back on her false eyelashes, already impeccably in place ahead of the Europeans.

“C’mon, I can’t wear mascara so that’s my thing!” she laughs. “I played with an American once who said her eyeliner was her war-paint and I could understand that.

“My motto is ‘Look good. Feel good. Play good’,” she grins, an athlete totally of her time with a slogan worth adopting if it helps more young girls to find and embrace their sporting tribe.

1 Unanimous or unfair? Opinions divided on Sam Bennett’s Vuelta relegation
2 Ronan O’Gara: Ireland need to be braver than usual ‘in a shoot-out for gold’
3 Jackie Tyrrell: We’ve got the championship back. But where’s the physicality?
4 Ireland can treat fans to some tricks on Halloween night in Paris
5 Six Nations - France v Ireland: Kick-off time, TV details, permutations, team news and more
Real news has value SUBSCRIBE