Joanne O’Riordan: Sport can be a game-changer in broadening our horizons 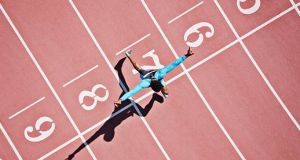 Sport is a massive key to unlocking the door to difference and learning to embrace new cultures. Photograph: Getty Images

Smiles. Happiness. Joy. Inclusion. Greatness. These are the words that sum up every athlete, parents of the athlete, and, really, everyone that participated in the Special Olympics. From the person handing out water to the physios to the exuberant parents watching with pride in the stand, every year the Special Olympics is one of the few events that embody the reasons why we participate in sport.

A new facility will be opened soon called the Sports Academy, which will be open for both able and disabled people with a keen interest in sports. It will serve people of all abilities, from intercounty stars and international athletes to ordinary Joes like myself who are interested in sports from the sideline. The idea is simple – everyone, from the ordinary to the extraordinary, is equal and should be treated that way.

The Sports Academy will allow sports people, able and disabled, to enjoy, prepare and compete to the highest standards. It has been designed to address the needs of paralympic level athletes as well as opening up a world of opportunities and access to sports and recreation for people with disabilities in our society.

The Special Olympics were always an event that I watched with awe and felt inspired. From a backyard summer camp in Eunice Kennedy’s Shriver’s home to a world-renowned event, the Special Olympics has been changing attitudes and battling stigma and labels since 1968.

Sport is a massive key to unlocking the door to difference and learning to embrace new cultures you would have never interacted with before. Sport can be a game-changer in broadening our horizons and enlightening us on subjects first hand that would have been unknown to us a mere few months ago.

We have seen at this World Cup how sport can drive over barriers and unite people from across the globe. Never in our lives did we suspect we would see Russia open its doors and barriers to people who want to party, celebrate difference and learn about new cultures.

It’s the same with how we have developed our thinking on people with intellectual disabilities. The Special Olympics have helped us in learning about something that was taboo a few decades ago.

Having an intellectual disability in times past would have been seen as a stain on your family. It would be a hush hush topic, and more than likely families would have been pressured to give up their children as they would have never been empowered to fight for what is right and have a child that could and can bring so much joy and happiness.

My disability is visible, but intellectual disabilities are hidden, meaning there are more challenges. However, I believe with the power of the Special Olympics, communication, discussion and general interaction, I believe these barriers will be broken down.

Just like the World Cups, just like any other sporting event, this is the time to showcase those who are struggling with a disability. Reach out to someone you know with an intellectual disability or a family with a child with intellectual disabilities. If you don’t know someone, go find someone. They do exist. They’re here. They probably live close to you.

If you pass a person on the street with an intellectual disability, instead of looking away and pretending they do not exist, stop. Smile. Start a conversation. Share what you learn. These simple actions will begin to change the game.

Having an intellectual disability is not something you should be ashamed of. Be proud of yourself, and of your differences.

If you are the mother/father or guardian of one, don’t wrap them in cotton wool. Let them experience the world, and interact and change the lives of others.

This is not a disability you should be ashamed of, this is your superpower. This is something that makes you unique and different. Be proud and shine and change someone’s day...for the better.