Sonia O’Sullivan: Sarah Healy shows she will be one to watch

Novice 1,500m runner is now putting a bit of pressure on Ciara Mageean 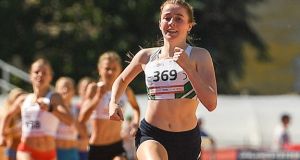 Every time Sarah Healy has stepped on the track this year she has impressed, her progression perfectly steady. Photograph: Inpho

I get the feeling the summer of sport is really heating up right now, no matter where you are in the world. The World Cup has that effect on people. Even though Melbourne was the coldest urban city in the world on Tuesday morning, waking up to a not balmy three degrees.

Russia beating Saudi Arabia 5-0 set the mood for the World Cup, but in Melbourne, things were gently warming up among Irish rugby fans, eagerly anticipating the second Test against Australia. There was a real sense that things were going to be a whole lot different to the first Test in Brisbane, and so it proved, with the series level now entering the winner-takes-all final Test in Sydney this Saturday.

There’s something magical about a big game in a packed stadium, colourful fans and a strong vocal Irish support. Especially if you are lucky enough to be sitting within touching distance of the boundary line, with as good a view as any camera on the touchline, when Tadhg Furlong touched down early in the second half for Ireland’s second try of the game.

As buoyant as I still felt with this result waking up to a wintery Sunday morning, it was nothing like picking up the overnight results from a relatively unknown obscure athletics meeting in Tübingen, in Germany.

There were a number of quality races, but the one that singled out for me was the women’s 1,500m. When you really understand an event it doesn’t take any research or discussion to know when an athlete stands out as someone to watch and keep an eye on throughout the summer. And the rest of their career.

Sarah Healy ran 4:09.25, and at just 17 years of age, already competing at the highest level in athletics. With one more year of school still left to go, she is currently the second best Irish woman over 1,500m runner this year.

She is also he fastest under-18 schoolgirl in the world, and second fastest ever in Europe in that same age group. Every time Sarah has stepped on the track this year she has impressed, her progression perfectly steady, and she is now putting a bit of pressure on Ciara Mageean who was in the same race in Germany, finishing just 2½ seconds ahead in a season best 4:06.70

This sort of competition, no matter what the sport, can only be a good thing. There is no room for complacency when there is a young athlete nipping at your heels, breaking or threatening all your records, and a constant reminder if you falter there is now someone in line to take your place.

The comparison could even be made right now with Johnny Sexton and Joey Carbery, the established player and the young apprentice.

In order to maintain high standards, there needs to be a continuous flow of young athletes ready to fill the shoes as time goes on. There has been a bit of a lull in Irish distance running in recent years, but maybe now there is fresh hope. When there is some competition on a similar level, the more experienced athlete will often raise their game, while the next generation continue to learn and develop.

I know it’s a dangerous thing to focus too much on age and statistics. These are all interesting facts, but they don’t really change anything when you line up in a race with the sole purpose of beating as many athletes as you can. In the process of running faster than ever before, the question is always how do you contain such talent and do enough but not too much?

Ciara has had to shoulder a lot of expectation since running similar fast times as a schoolgirl athlete, winning European and World medals as a youth and junior athlete eight years ago. She has endured some setbacks along the way, but has always been looking ahead, trying to fulfil a projected potential. Sometimes it’s better to just live in the moment and be the best you can be today, rather than always trying to look for more and just let it come rather than chasing all the time.

As the apprentice, it’s important to take each stepping stone and not skip over some steps along the way. There is still the need to build that base and foundation, something to sign off on each year, then build on again and again as each new season comes around. So many athletes have a rollercoaster ride from when they first arrive on the world stage until they are really established and can feel that they belong.

Ciara is the perfect example of how much time, dedication and commitment it takes, given the injuries she endured along the way. But when you have talent and some success it doesn’t go away. You just have to keep working hard to be rewarded and achieve a level that came so easy when you first started out.

Athletics, and particularly distance running, is one of those sports where there are many potholes to navigate along the way. For all the science and support and knowledge and experience we have to fall back on, there are still some unavoidable pitfalls.

The gut instinct within an athlete is so often what makes that athlete great. Each athlete is so different, that it can be difficult to know exactly what path or what steps to take to ensure the best results, particularly if you think about things too much.

One thing for sure is that it’s best not to try to take them all in one go. It’s best to focus on your main priority for the year, and whatever times or medals or opportunities that come along to enhance this path are learning experiences for future years.

Every race should also have a purpose, and that purpose shouldn’t always be to run a fast time or break a record. Once you know you can run fast then it’s time to work on race tactics, positioning, and being comfortable in a pack. This is ultimately what will get you from the heats into the finals at major championships, one of the most important details that many athletes fail to practise.

While the World Cup and Test rugby may be stealing the current headlines, some of our athletes continue to bubble along at a steady pace, not even half way through the season with plenty to look forward to in the weeks ahead. Not least the European Championships in Berlin in just over six weeks, the time to be running and racing at your best.

1 Ireland 23 Georgia 10: How the Irish players rated
2 Ireland grind their way to grisly win over Georgia
3 No fireworks but Limerick get the job done against Galway
4 Jim McGuinness: There is a way to save championship and make it competitive
5 Billy Burns provides silver lining to gloomy Ireland display
Real news has value SUBSCRIBE