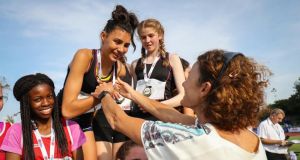 Sophie O’Sullivan is presented with a medal from her mother Sonia at the Cork City Sports last year. Photograph: Oisin Keniry/Inpho

Sophie O’Sullivan, daughter of Olympic silver medallist Sonia O’Sullivan, will make her international debut in an Irish vest over 800 metres at the European Youth (under-18) Athletics Championships in Gyor, Hungary next month.

The 16-year-old O’Sullivan, who has dual Irish-Australian citizenship, won an Irish under-17 title over 1,500m last summer representing Ballymore Cobh AC, 32 years after her mother won the same title back in 1985.

O’Sullivan has also won Australian under-17 titles over 800m and 1,500m, her selection for the European Youth Championships confirming her preference to represent Ireland.

The Youth Championships, which take place from July 5-8th, will also include the gold medal favourite over 1,500m in Sarah Healy from Blackrock AC in south Dublin, who tops the rankings in that event by a massive 10 seconds after her standout 4:09.25 in Tubingen, Germany last Saturday.

There are medal prospects elsewhere among the 23-string team, including Rhasidat Adeleke from Tallaght and Cian McPhillips (Longford).

McPhillips is another leading light on the rankings and he is second in the 1,500m with his time of 3:49.85.

Among the Irish U-20 team selected for the Mannheim Gala this weekend is European Junior (under-20) 100m champion Gina Akpe-Moses (Blackrock/Louth). Akpe-Moses is eying up next month’s World Junior Championships in Tampere, Finland - where Healy has also qualified.