Sonia O’Sullivan: Our athletes need to win on track not social media 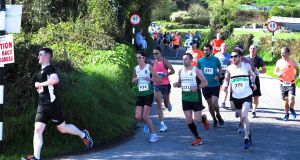 Sonia O’Sullivan on a run in Cork. The growth and popularity of running is hard to miss wherever you go

A bit like the church, shop and pub, it seems like there is a running event in every village in Ireland. I’ve been travelling the country from Cork to Mayo to Kildare and back again over the last 12 days, and have seen colourful attractive posters at every stop for fun-runs, charity runs, club runs, you-name-it-runs.

These are mostly flagged as “runs”, not “races”, and it is very encouraging to see so many people getting out and running, jogging or even walking. Some are also doing their bit for a local charity, supporting a local event, and often exploring new paths, trails and roads while benefiting their physical and mental health.

The membership of Athletics Ireland is now close to 50,000. It is not all runners, but athletes competing in events for clubs all around the country. And the overall numbers go far beyond that – the growth and popularity of running is hard to miss wherever you go.

In the past two weekends alone I’ve taken part in five running events, including two park-runs with over 600 people involved: not just the runners but the volunteers, supporters and groundsmen.

The park-run movement is much more than just a 5km run; it’s a free community event, bringing people together every Saturday at 9:30am in parks across the country. The central point is the run, but from what I’ve seen recently the volunteers that turn up week after week get as much endorphins as the runners and that doesn’t go unnoticed.

In Mayo last weekend I also paid my annual visit to the West of Ireland women’s mini-marathon, a challenging 10km run, one of the most colourful and fun women’s runs in the country.

I also stopped off in Claremorris to join the park-run on Saturday morning, encompassing two linked parks, Clare Lake and the Land of the Giants park. It was Mayo Day, so there were plenty of red and green jerseys on display as we ran around the soft tree-lined paths broken up by the array of giant everyday items around each corner.

This growth of running is a reflection of the similar running boom of the 1980s but with one big difference – we are now in the age of taking part, of being active, fit and healthy. The properly competitive element is clearly not the priority it once was.

The percentage of elite Irish high-performance athletes competing at the highest level is decreasing each year. If you look closely the bar has been lowered, and sometimes we find ourselves applauding mediocrity.

There are many people involved in athletics in Ireland who have seen the highs and the lows, and remember a time when we looked forward to the summer season of athletics and Irish athletes established on the world stage returning for the new season.

Much of that excitement seems to have gone, and while we do still have our select elite athletes such as Thomas Barr – with Phil Healy also opening her outdoor season with some encouraging sprint times – it’s time now to raise the bar once more. We need to be disappointed and bothered when we don’t achieve high levels.

I’ve always appreciated the many different levels of athletics, from starting out as a young athlete, eyeing up Irish records and chasing athletes along the way, to competing at the highest level. And now the simple joy of running, and how it infiltrates the lives of so many people.

Running will always have that recreational fitness activity, partly governed by Athletics Ireland, but who also have the responsibility for the high-performance end of the sport.

Too many are operating in the comfort zone, too worried about sharing their training sessions, meals and travel destinations on social media.

When an athlete goes to a championship more often you get the impression they are on a sporting holiday, with all the snaps and videos being sent home.

What is more important? To be a great athlete who delivers a result on a major stage, or an athlete who uses their national team status as some sort of platform to grow their followers and maybe gain extra sponsors to fund the athlete lifestyle.

There has always been a depth of Irish youth and junior talent, but so often these drift away and the great prospects never live up to their potential. It’s time now not just to applaud and award our young athletes but to set them on a path to greatness.

The first step is a plan for continual improvement and every year at least one step better than the year before. If this doesn’t happen the athlete needs to be asked why, and how they can be helped to get back on track.

How can it be the Irish women’s marathon team named for the European Championships in Berlin in August has an average age of 38?

Too often we use age as a limitation, hindered by under-23 competition when most successful athletes are already making an impact at that stage in their careers

Where are the younger women with less miles in their legs, aspiring to not just represent Ireland but to be competitive at international level?

These European Championships were so often the breaking ground for athletes, a stage where they could make a final and be competitive. It is 88 days to Berlin, still time to make big changes and make an impact.

I’m more optimistic of the youth and junior Irish athletes, but once through this stage a practical and productive pathway needs to be put in place to ensure these athletes develop and step up to the senior level. That’s both the challenge and opportunity for Athletics Ireland, one of the most important areas for the new CEO Hamish Adams to prioritise.

Too often we use age as a limitation, hindered by under-23 competition when most successful athletes are already making an impact at that stage in their careers.

It’s one thing being the best athlete in Ireland. But once an athlete reaches this point in their career they need to identify the next target, raise the bar, and for everyone involved to be more accountable.

At the highest international level it’s more than just a run in the park.

1 Rugby impasse continues as no deal reached in fourth round of IRFU salary talks
2 College football turns blind eye to Covid-19 by risking players' health
3 The Best Of Times: Harrington stares down Garcia in epic Claret Jug battle at Carnoustie
4 Aubameyang double puts him level with Vardy in race for Golden Boot
5 Jürgen Klopp: Liverpool will channel spirit of the All Blacks
Real news has value SUBSCRIBE
Here is your handy guide to sport on television this week